How Ms. Got the Story from George Tiller's Murderer - Ms. Magazine
Skip to content 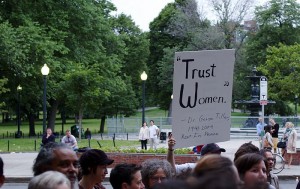 One year after abortion physician George Tiller’s murder by Scott Roeder, who is now serving a life sentence in prison, Ms. magazine questions the “lone wolf” theory about anti-abortion extremist killers such as Roeder. In the current issue of Ms., now on newsstands, investigative journalist Amanda Robb probes this assumption that the killers have acted alone through interviews with Roeder himself, as well as with some of his acquaintances in the homicide-justifying wing of the anti-abortion movement. We had a few questions for Robb, who has a very personal attachment to this issue because her uncle, Dr. Barnett Slepian, was also murdered by an anti-abortion extremist. (Robb, in fact, was mentioned by Sen. Harry Reid in his recent remarks honoring George Tiller.)

Ms.: How did you feel when you heard news of Dr. Tiller’s murder a year ago? Did it bring back the pain of your uncle’s death?

Amanda Robb: I heard it from my mother, who called me in tears. She left a message on my answering machine and said only that another doctor had been killed. It was extremely upsetting, because I know what it does to someone’s family. It’s not like losing someone from illness or anything else–it rips a hole right in the middle of your family.

Ms.: You wrote about your uncle’s killer, James Kopp, and got to interview him. When you got the assignment from Ms., how did you make contact with Scott Roeder?

Robb: I didn’t want the assignment from Ms. and turned it down several times because I’d already spent so much time with anti-abortion extremists. Eventually I was seduced to do it with the idea that some good could come out of it—that we could try to mitigate violence somewhat. As for contacting Roeder, I’ve interviewed a lot of murderers, and I know one thing they have is time on their hands. They’re hungry for any kind of human contact. I just wrote him and said who I was and that I wanted to understand him–which I did–and he called me right away.

Ms.: You also attended Roeder’s trial in Wichita, and you spoke with other well-known anti-abortion extremists there?

Robb: I had tried to talk to Michael Bray [of the Army of God] and Randall Terry [former head of Operation Rescue] before, and neither would talk to me. But Randall Terry was super friendly to me at the trial, and Michael Bray talked to me plenty. There was a lottery to get into the courtroom, but it turned out better not to get in and instead go downstairs and watch it on television, because there you could talk. Bray and a couple of the other of the anti-abortion folks would comment to each other.  They were obviously upset that it was a straight-up murder trial and the defense wasn’t allowed to present any evidence that Roeder was trying to save others from dying by murdering Tiller. They absolutely see this as the equivalent of fighting slavery or the Holocaust.

Ms.: I understand that the U.S. government is still investigating the murder—do you think the question of who influenced Roeder’s thinking should be looked into by the Justice Department?

Robb: I definitely think it should be, because I think people like Scott Roeder or Jim Kopp don’t just pop out like Athena from Zeus’s head. I believe that these are weak people with little structure in their lives, looking for purpose and meaning. Other people and movements give it to them. You’ve got extremists talking to extremists, and there’s a reasonable possibility they are egging each other on.

Above: Vigil for Dr. Tiller in Boston after his murder last year; the phrase “Trust Women” was Tiller’s motto. Creative Commons Attribution 3.0 Unported