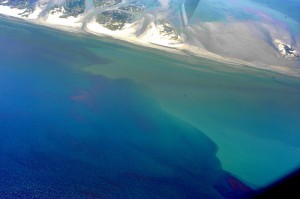 The oil and gas industry is dominated by men, but it’s mostly women who are cleaning up British Petroleum’s mess. According to Jenna Goudreau at ForbesWoman,

Indeed, various women’s groups are coming together to protest the spill. For instance, Coastal Women for Change, founded in 2006 by Louisiana hairdresser and community activist Sharon Hanshaw to help rebuild communities in the aftermath of Hurricane Katrina, is now involved in trying to help local fisheries communicate with federal agencies like the Environmental Protection Agency. Those fisheries have significant impact on the Gulf Coast’s economy: Hanshaw told The American Prospect that about 13,000 people in the affected region work in the seafood and restaurant industry.

CODE PINK: Women for Peace, a women-initiated grassroots peace and social justice movement, has made headlines with more dramatic means. At protests, scantily-clad women have appeared covered in oil, holding up “The Naked Truth of Drill Baby Drill” signs. Some feminists, however, take issue with the protest–Jezebel commenters pointed out their use of plastic props.

As women emerge as some of the most vocal critics of BP’s tactics, CV Harquail wondered on Feminist Blogs In English if more women executive leadership at BP might have prevented the spill. BP’s most senior woman executive, Vivienne Cox, resigned from her post as head of the company’s Alternative Energy department the day before that department was shut down last year. She left a board and executive management team that is almost entirely composed of men. Critics like Rep. Luis Gutierrez claim that BP consistently ignored safety and environmental regulations, and Harquail cited several studies that suggest women could have done better:

Responsible environmental practices are more important for women than for men when considering a potential employer. (Aspen Institute, 2008).

Harquail cited several other studies with similar outcomes, and said:

If there were more women executives, managers, and employees at BP, there would have been more concern for the environment, more pro-environmental behaviors, and more effort to make BP develop responsible environmental practices that would have a positive impact on society.

Harquail was careful to note that not all women and men exhibit these respective attitudes. Nonetheless, she maintains,

increased representation of women/gender balance is a significant, under-appreciated strategy for getting more pro-environment, sustainability-focused, risk-sensitive leadership into organizations like British Petroleum.

The U.S. federal agency Mineral Management Service (MMS), though, has recently lost, not gained, in leadership from women. Elizabeth Birnbaum, appointed director of the MMS less than a year ago, last week “resigned”, according to Secretary of Interior Ken Salazar.

Above: Oil slick off Chandeleur Islands in the Gulf of Mexico as seen from plane; from Creative Commons, attribution 3.0 unported