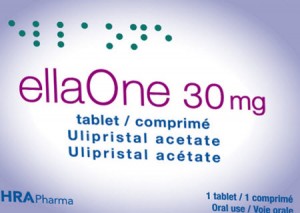 Anti-choice people get very upset when women have sex and don’t want to have a baby. It doesn’t matter if the sex was voluntary or forced; they seem to believe women should just accept any resulting pregnancy with equanimity, good humor and a sense of duty.

That’s why news of a new emergency contraceptive pill (the morning-after pill) for women has them outraged.

On June 17th, the Reproductive Health Drugs Advisory Committee, an advisory committee to the Food and Drug Administration, will consider recommending ellaOne, the brand name for ulipristal acetate, for U.S. women. The pill is currently available in 21 European countries with a prescription and has been found to be effective up to 120 hours (five days) after unprotected sex. The  emergency contraception currently available in the U.S. is Plan B (levonorgestrel) and its generic versions, which also work for up to five days (although, like ellaOne, it is more effective the earlier it is taken.)

But none of that matters to those opposed to women’s reproductive rights. They argue that Plan B causes abortions in many cases, and they characterize ellaOne as the next generation of RU-486–the non-surgical abortion pill, mifepristone.

But both Plan B and ellaOne are emergency contraceptives that prevent pregnancy, while RU-486 terminates an early pregnancy. Mifepristone and ulipristal acetate are different compounds.

All this is fodder for a battle. Even though emergency contraception has been widely available in Europe since the 70’s, the FDA did not approve Plan B until 1998, primarily as a result of anti-choice lobbying. It took another eight years to approve making it available over the counter (OTC) for consumers 18 and older. It was only last year that federal Judge Edward Korman ruled that the FDA must make it available OTC to 17-year-olds as well.

Above image from HRA Pharma.Now that emergency contraception is widely available and we have a pro-choice administration in Washington, D.C., let’s hope the FDA will act in the best interests of women and not bow to anti-choice rhetoric and hysteria. Women deserve as many options as possible in their quest to control their reproductive lives.

[UPDATE: This piece has been corrected since publication; our thanks to commenter NYCprochoiceMD for picking up on several errors (see comment below).]