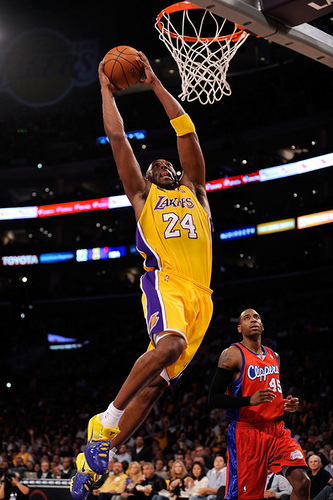 In 2003, when Kobe Bryant was accused of raping a hotel employee–who later refused to testify after her name was dragged through the mud–I first contracted Kobe-Bryant-is-a-Rapist Tourette’s. The condition consists of blurting out at inopportune times (such as the current Lakers vs. Celtics NBA championship finals) and to unsympathetic audiences (such as the denizens of Los Angeles), “But, um, does it bother you that Kobe probably raped someone?”

If you have a similar condition, you will be familiar with the following responses:

I carefully crafted a counter-argument in a Salon.com comment seven years ago:

[This is a] sexy fairy-tale portrait of men who are given whatever they want. … Athletes who are constantly rewarded for aggressive, hyper-“masculine” behavior learn to cultivate and act on violent impulses, and as celebrities they learn that they can act without consequences.

I use a version of this as my retort. It has never ever convinced anyone.

So I turned to Jaclyn Friedman, co-editor of Yes Means Yes: Visions of Female Sexual Power & A World Without Rape, for talking points, and she gave me a brilliant one:

Ever heard a rape charge against Tom Brady? David Ortiz? Lance Armstrong? Heck, for all the money and bad press Tiger Woods has earned, has anyone ever accused him of rape? The truth is, there are hundreds of filthy rich, incredibly famous men, and only a small handful of them have been accused of rape. If inventing a rape accusation was a great way to get rich, it would be a lot more popular.

Statistically, she’s on to something. More than 20 women came forward as mistresses of Tiger Woods, and none accused him of rape.

But Jaclyn–someone with purple-and-gold froth beginning to pool at the corners of their mouth may interject–maybe all these women just weren’t smart enough to realize they could get money and fame from a false rape accusation!

Jaclyn has an answer for that, too:

Actually, that hardly ever works. Much more often, women who are brave enough to publicly accuse rich and famous men of rape get vilified in the press, have their personal lives exposed and mocked by fans and are disbelieved by police and the courts. In fact, a study by USA Today in the wake of the Kobe Bryant rape trial found that athletes charged with rape were far less likely to be convicted or even agree to a plea deal than non-athletes.

But Jaclyn … Kobe’s rich and famous. He can get laid anytime. Why would he need to rape anyone?

So if you’re watching the Celtics-Lakers with friends tonight and, like me, you look at Kobe’s slick moves and think only, “Man, I wouldn’t want that guy raping me,” go with the impulse and ask, “Um, isn’t Kobe a rapist?” And then–after you get the expected responses–quick, quote Jaclyn Friedman.