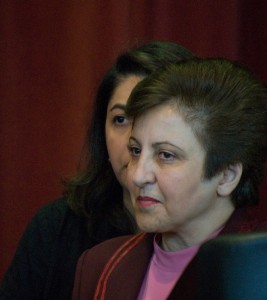 The Iranian government has come up with a new strategy to combat activists: Destroy their privacy. On June 10, Channel 2 of Iranian national TV aired a report of an interview with Javad Tavassolian, husband of prominent human rights activist Shirin Ebadi, set in their home, in which Tavassolian speaks against her. Ebadi, a Nobel Peace Prize winner, has stated that the interview was a result of government interrogators putting pressure on her husband to inform on her.

Parvin Ardalan, Iranian women’s rights activist and winner of the 2007 Olof Palme Prize, notes that forced confessions aren’t unique to the current regime. In every period,  the Iranian government has monitored people’s personal lives to control their political activities, she says.

The difference is that, with this new series of interrogations, activists and detainees are not confessing about their own personal lives; the government is pushing activists’ loved ones and family members to inform against them to pressure them to give up their activism.

Asieh Amini, Iranian journalist and activist, describes how the government’s practices have changed over time:

The government forced activists to confess in the 1980s. Those confessions had two purposes: One was to scare people and affect public opinion, and the second was to alienate the activists from their peers. Later this type of confession was modified because it wasn’t having the intended effect. Opposition groups were destroyed and silenced, and the confessions were used only to threaten, humiliate and break down opposition members. Today, the authorities are arresting a political activist’s spouse or family member to stop the activist’s work—in essence, holding the family members as hostages.

In Ardalan’s opinion, the people’s resistance has made the regime’s previous method of using confession to influence public opinion ineffective, and that is why they have had to change their strategy. “For example,” she says, “In their last act against Ms. Ebadi, they use her own home as their confession location to make it more acceptable and believable for people.” This method, she says, may work for a while, but as people’s awareness rises this method will soon lose its effect as previous ones did, and the authorities will have to change their approach yet again.

Khadijeh Moghaddam, a prominent women’s-rights activist, points out the role of gender in the extraction of confessions:

In a patriarchal society, a woman in considered to be a man’s belonging. A woman is part of a man’s honor. So the authorities put pressure on male activists by threatening to arrest or rape their female family members, as happened during the Shah’s period. In truth, this is not a threat to someone that they love, but something that they own. If the activist under pressure is a woman, the basis of the attacks is also gendered. For example, in Ms. Ebadi’s case, they force her husband to sit and defame her by saying that she is an unruly wife. So they attack her not for her own activism, but for not playing the expected role as a wife to her husband.

Moghaddam, who herself has been imprisoned and interrogated, adds with laughter:

Soon they may arrest our husbands and ask them if their wives obey them–and if the answer is no, they force them to sign the divorce paper. [Interrogators think] there should be a man who makes decisions for a woman–and if the husband is not doing that, well, the male interrogators should.

In such cases, Ardalan says, “The interrogator sends a message to men: A woman’s empowerment is insulting to men’s power.”

I remember the first question I was asked when I was arrested was if my husband knows I am doing activism. And when I said yes, the interrogator asked me with disgust, “And he allows you?” In my interrogator’s opinion, even to be active in the women’s rights movement, I had to have my husband’s permission!

Amini believes that most interrogators, usually men, subscribe to the sexist societal belief that women are sex objects. They believe that a man and woman can only have sexual relationships and nothing beyond–and since having a sexual relationship outside of marriage is illegal and a social stigma, especially for women, interrogators use that as a weapon against women. She says:

I can never forget what a young woman journalist told me two years ago when she was released from the prison. She told me, weeping, that the prison interrogators gave her a long list of her male co-workers and forced her with torture to admit how many of them she had had sex with. She said at the end she couldn’t resist, and had to mark some of those names, and she is now always worried how these men will react if they learn about it.

Moghaddam compares the new, invasive tactics to the recent at-home arrest of Narges Mohammadi, a woman who has spent her life working for human rights:

First they don’t let her work and then in the middle of the night, in front of her kids eyes, they arrest her. When there is no respect for basic human rights and morals anything can happen.

Moghaddam believes that the Shirin Ebadi’s popularity and influence internationally are the main reason for the authorities’ new tactics. “They don’t want anyone with that much power and influence on people, even if it is for good.”

This piece originally appeared in Persian on the independent Iranian news site Mardomak.org; it has been translated and condensed for Ms. by Esha Momeni.

ABOVE: Shirin Ebadi during a 2008 trip to the U.S. Photo from wickenden under Creative Commons 3.0.