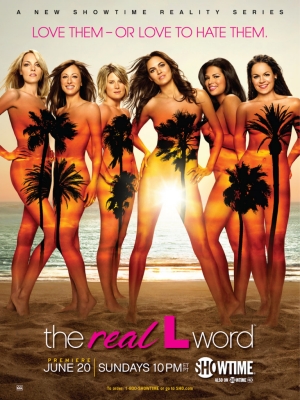 Showtime’s new series The Real L Word follows the success of the scripted TV series, The L Word, which ran on Showtime from 2004 to 2009 and garnered a passionate following. The reality version is produced by L Word creator Ilene Chaiken, along with Magical Elves, the team that brought us Project Runway and Top Chef. It boasts of being the “first gay-themed reality show on premium cable” (I guess they’re not counting Logo, which broadcast the surfer-lesbian show Curl Girls in 2007, as “premium”).

Both the show’s title and coy suggestions about similarities between the fictional characters and the real ones deliberately lead us to believe that there will be some connection between each Chaiken series. But even more than that, the new show wants us to see it as connected to actual life as we know it. “The L Word just got real,” the ads tell us.

While The L Word linked itself marketing-wise to Sex and the City when it first came out (“Same sex. Different city.”), The Real L Word links itself to the lucrative Real Housewives franchise (“Hotter than Housewives” and “Cool as L”).  In the promotional material distributed by Showtime, we learn that the program will “show viewers that these lesbian women can be every bit as glamorous, fashionable, fabulous and even as cutthroat as those hetero housewives.”

The women of The Real L Word live in a world Chaiken calls “aspirational”–a term from advertising about creating desires in consumers for what they’d like to have (usually if they had more money). That ought to tip us off to the framework we’re being offered: There’s not much range in terms of age, body type, skin color and class affiliation among these reality stars; instead, the emphasis is on what the dominant culture finds sexy, and sex is one of the things the show sells hard.

As someone who watched every episode of The L Word and talked about it with friends, colleagues and students, I’m clearly part of The Real L Word‘s target audience. If you followed the numerous discussions that took place online and elsewhere, you know that the scripted series was a show many lesbians and feminists loved to hate. On the one hand, as Sal Renshaw wrote in Ms. (Winter 2009), the original show’s “women-centered focus [made] it very different from…most every other TV drama or sit-com.” On the other, the representation of lesbians was problematic, to say the least.

That said, because it was clearly a work of fiction, viewers knew upfront that the lifestyles depicted in it were unrealistic. If my wife and I occasionally threw things at the screen because of stereotypes and clichés we found offensive, we kept watching because we enjoyed many of the characters and story lines–as make-believe television drama. How might we react to a series whose premise is that the women onscreen are real? Chaiken says in the press release, “This new reality series is a fresh take on The L Word, another look into the same world, the same themes…but in a whole new genre.” I wondered whether the change of genre would make a world of difference.

I contacted Jennifer Pozner, founder and director of Women in Media & News and author of the forthcoming book, Reality Bites Back: The Troubling Truth about Guilty Pleasure TV, to get her thoughts on how reality television differs from scripted shows. Pozner has strong views on how damaging such programming can be. She told me by phone:

Reality TV is functioning as the new backlash against women’s rights and social progress.

What makes reality programs so insidious, she argues, is that viewers tend to believe “two big lies” about such television: first, that these shows “exist because people want them to exist,” and second, that “you can’t make people say what they didn’t say.” So the shows are, in essence, true. But Pozner wants us to understand that reality TV only exists because advertisers and corporate media entities make money off of them. As for their truth quotient, she points to the extensive selection and editing processes that go into a show, beginning with casting decisions and continuing through the spliced-together scenes that are made to look as though they happened exactly as we see them onscreen. It’s our willingness to suspend disbelief in the face of reality programming, according to Pozner, that makes these shows deeply problematic. We spend time fretting over the sorts of role models and representation scripted TV and film offers women, but consider how much more influential programs that claim to be real can be.

Having seen the first two episodes, I can say that The Real L Word isn’t as focused on sex as the ads make it out to be. But it also does not offer the kinds of compelling stories that the fictional program did. Oddly enough, the real women seem more one-dimensional than the fictional characters did. Scripted shows have the advantage of being able to shape a character over the course of a narrative arc. Reality TV can’t offer the same level of detail because, however much footage they shoot and however much of the material gets plotted and planned, fiction has a kind of internal coherence that reality lacks. That’s why we say “truth is stranger than fiction.” You won’t find anyone as bizarre as The L Word‘s Jenny or as sweetly charming as Alice. The best parts of The Real L Word, in my view, involve the minor characters–girlfriends, lovers and family members of the central protagonists–perhaps because they suggest other possibilities for representation. (I’d love to see a whole series on Tracy’s girlfriend Stamie, her ex-girlfriend Julie and the three kids of whom they share custody. Now there’s some reality!)

The differences between the original L Word and The Real L Word may not, in fact be so great after all. Neither gives us a complex picture of the range and scope of the lives of real American lesbians. Forced to choose between them, I’d go for the reruns.

If you end up watching the series, I recommend that you cultivate a resisting point of view. Ask yourself who and what you’re not being shown. Count the references to products or depictions of consumer goods. Imagine alternative scenarios. Then turn off the TV, walk outside and enjoy your real world.

Poster of The Real L Word from Showtime.