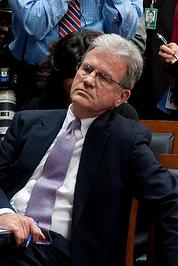 Senate conservatives blocked the Homeless Women Veterans and Homeless Veterans with Children Act on Tuesday, following an objection from Senator Tom Coburn (R-OK, left), who spoke out in opposition to the bill. The $3.4 billion bill, introduced by Senator Patty Murray (D-WA), would have provided special benefits to homeless women veterans (as well as to homeless male veterans with dependent children).

Women returning from war have unique risk factors for homelessness, such as trauma from sexual assault while in the military and lower earning potential than men. According to the Vietnam Veterans of America:

Homeless women veterans present different needs with reference to privacy, gender-related care, treatment for physical and sexual trauma, and care for dependent children. Due to these compounding issues, very few programs are available to serve and appropriately meet the needs of this particular homeless population.

So as hundreds of thousands of veterans return from Iraq and Afghanistan, the Department of Veterans Affairs struggles to accommodate their most basic needs. And as the number of women serving in combat continues to grow, so will the need for specialized assistance for women veterans. Passage of the Homeless Women Veterans and Homeless Veterans with Children Act would have been a start.

Blocking the bill is a puzzling move on the part of conservatives, for whom talking about things like Christian compassion, family values and supporting our troops is a cherished pastime. Must be the whole doing something thing that makes them squeamish.

Tell your Senator that supporting homeless women veterans and their children is the patriotic thing to do.

ABOVE: Photo of Sen. Tom Coburn from Flickr user SenateDemocrats, under CC 2.0