How Gender Fits Into the Shirley Sherrod Affair - Ms. Magazine
Skip to content 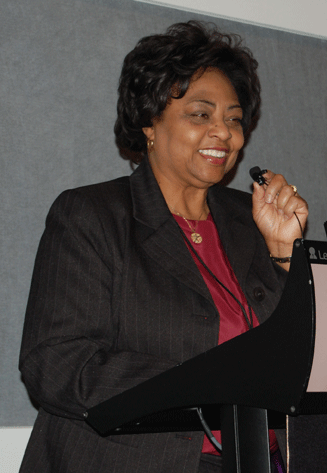 Regardless of our feelings on race, we hate unfairness and injustice. Most of the time. And that’s why there has been pretty universal acclaim for Shirley Sherrod, the Georgia State Director of Rural Development for the Department of Agriculture, who was forced to resign in the midst of a mean-spirited, race-baiting firestorm and then was apologized to (and offered a new job) by Secretary of Agriculture Tom Vilsack and called by President Obama. (For those who have managed to evade the story, conservative blogger Andrew Breitbart maliciously manipulated a video clip from a Sherrod speech to make her look like a “reverse racist,” and the administration initially swallowed it hook, line and sinker.)

Few people, however, have paid attention to the gender dynamics of this racial controversy, and why conversations unfolded the way they did because a black woman was at the center.

Black women are often targeted for political strategies that play on fears of racial and sexual difference, as Princeton professor Melissa Harris-Lacewell recently pointed out on MSNBC’s Countdown with Keith Olbermann. Think President Ronald Reagan’s “welfare queen” or President Bill Clinton’s attack on Sistah Souljah. There is a reason why the malicious denouncements against Sherrod were so instant and went viral so quickly.

As a nation, we feel comfortable turning up the volume of our hatred on a group that is marginalized by racism, sexism and classism. Our society often paints black women as the “social problem” rather than the victim of these “isms.” We black women become easy targets of attack for two reasons:

1) Those who initiate the attacks–the Andrew Breitbarts of this world–feel they have social and cultural “permission” to do so.

2) Those who respond to these attacks by adding their own voices of condemnation–the initial responses of the NAACP and the USDA–which reacted to doctored video footage of Sherrod’s speech–feel that black women, as a group, can be sacrificed for political expediency.

However, in the defense of Sherrod we see a different but also problematic response to the black female body: the guilt of witnessing what liberal pundits like to term the “assassination,” the “lynching,” or the “bus-throwing” of the strong black woman. She is framed as the noble victim who stands firm against the winds of injustice because this world done her wrong. Her slow, defiant walk to the stake for her witch-burning (or lynching, as the case may be) inspires a different kind of racial guilt.

This alternate image is just as common, and perhaps springs from the same reservoir of racial angst. There may be those who still wish to vilify the “racist” black woman, but there are just as many who want to herald the martyred hero of these new “race wars.” Some, like Sophia Nelson at the Huffington Post, go so far to ask whether or not Sherrod is the “Rosa Parks of our time.”

These conversations say a great deal about white guilt, from the knee-jerk “black people are racist too!” apologists of white supremacy to the pitying (and sometimes compassionate) cries for mercy toward the victimized-yet-heroic black woman.

But they also say something about gender. The gender of Rosa Parks highlighted the outrageous injustice of Jim Crow segregation. When she was expected to give up her seat on a bus to a white man, think of the violation of the “chivalry” expected of men toward women under that era’s gender social mores–mores that didn’t extend to white people’s treatment of blacks.

So too does the gender of Sherrod play a role in the uproar. A white man such as Breitbart unjustly attacking a black woman like Sherrod echoes a disturbing legacy of racial and sexual exploitation. While society might feel comfortable attacking black women as a group, many also feel uncomfortable watching a mismatch of power in a battle between a white man and a black woman. Especially when it looks like the lone black woman must face an army of men–Sherrod was slammed by men on both sides of the political battle lines, from Breitbart to Obama. (Kudos to Sherrod for holding her “allies,” the NAACP, the USDA and the White House, accountable for their betrayal before drawing attention to the primary offenders, Breitbart and Fox News.)

This frame has its pitfalls. In order for our gender sensibilities to be outraged, a black woman who’s victimized must play the part of being “above reproach.” Recent revisionist civil rights history has acknowledged the likes of Claudette Colvin, another black woman who refused to give up her seat on a segregated bus months before Rosa Parks, but since Colvin was an unwed pregnant teen, religious black leaders thought she was an unsuitable face of the civil rights fight. Would Sherrod have garnered our sympathy had she not demonstrated her respectability and ability to defend herself with dignity?

Sherrod admirably fought back, demonstrating to all of us how one can rise above the fray and maintain one’s integrity when self-defense is called for. Moreover, Sherrod, whose father who was murdered in 1965 by a white man (who was never brought to justice for it) and was active in the civil rights movement, made a valiant call to move beyond racial divisions and fight for social justice across class and race lines. That she would then be supported by Eloise Spooner, wife of rural white farmer Roger Spooner alluded to in the controversial video, speaks to the potential of interracial and class solidarity in the midst of racial breakdowns. Had the Spooners not come forward to corroborate Sherrod’s story, we may still be dealing with her vilification–thus proving the important role whites have in coming to the defense of people of color and standing up to systemic racism.

That they were willing to do this 24 years later and call her a friend speaks volumes about the redemptive road on which both Sherrod and the Spooners have traveled. May we follow in their path, and may feminists find the same courage to emulate this kind of solidarity that manifested itself amid the din of this latest media circus. And may we do so not just for those like Sherrod who can demonstrate they are utterly irreproachable, but for any black woman who is wronged.

ABOVE: Photo of Shirley Sherrod from Flickr user USDAgov under Creative Commons 2.0.