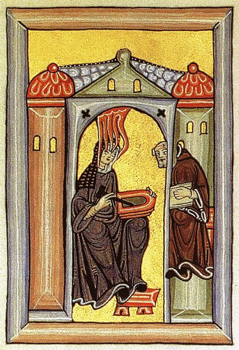 Who says that nuns can’t be hitmakers? Soeur Sourire, the Singing Nun from Belgium, had an international smash with the song “Dominique” in 1963. And now, the Benedictine nuns of the Abbaye de Notre-Dame de l’Annonciation near Avignon, France, have inked a deal with Decca Records, part of the Universal Music Group–home to Lady Gaga and Amy Winehouse, among others–to rock their Gregorian chants for the world. They were the winners of an international search of convents for the best chanting nuns.

From a feminist viewpoint, it’s hard to know what to make of a cloistered group of religious women who asked Saint Joseph–the unofficial patron saint against doubt and hesitation, according to Wikipedia–for advice before signing their recording contract. (Obviously he said, “Go for it, ladies!”) And as feminists we have problems with the organized Roman Catholic Church for, well, its desire to control women’s reproductive lives, its failure to ordain women priests and its appalling coverup of the pedophiliac behavior of certain priests, to name a few issues.

On the other hand, Catholics as individuals–and as a part of religious communities–have been at the forefront of many social justice efforts. The Avignon nuns are in a cloistered order, so they spend their days praying (and singing, obviously) rather than doing good deeds in the world, but it’s hard not to admire their ability to live a lifestyle that doesn’t require men to do all the handy work. According to the BBC:

The nuns are self-sufficient and include a plumber, an engineer, an electrician, a silk-weaver and a dental assistant.

Better add “recording engineer” and “social-networking expert” to the workload!

While the nuns hope their singing will help listeners “find peace,” the record company sees dollar signs: The BBC reports that the Cistercian Monks of Stift Heiligenkreuz’s 2008 album Chant: Music For Paradise sold more than a million CDs for Universal Music. Indeed, Gregorian chant–which dates back to Pope Gregory I around the year 600–has had a resurgence in recent decades, of interest to religious and secular listeners alike for the meditative qualities of its single melodic line sung by a group in unison. (Turns out that chant singing yourself is even good for lowering your blood pressure!). The iconic album of nouveau-Gregorian was Chant by the Benedictine Monks of Santo Domingo de Silos. Since the previous best-selling artists were monks, Universal Music apparently felt like it was high time to get some distaff voices into the mix.

And speaking of musical Benedictine nuns, let’s not forget Hildegarde of Bingen, the 12th century German Benedictine abbess, who’s known for her musical compositions, among many other talents (hey, she was even a guest at Judy Chicago’s The Dinner Party).

You don’t have to be religious or Catholic to chant: The four-woman acapella group Anonymous 4 have been doing it for years (see video below of them leading a “chant camp”). “It’s mystical without being religious,” says group member Susan Hellauer.

So we wish the best to the newest singing nuns–top of the Billboard charts! And if there is a closeted lesbian in their midst, as Soeur Sourire was, she can always break out of the nunnery, as Soeurire did, and do a disco chant duet with Gaga.

At top, image of Hildegarde of Bingen, courtesy of Wikipedia Commons