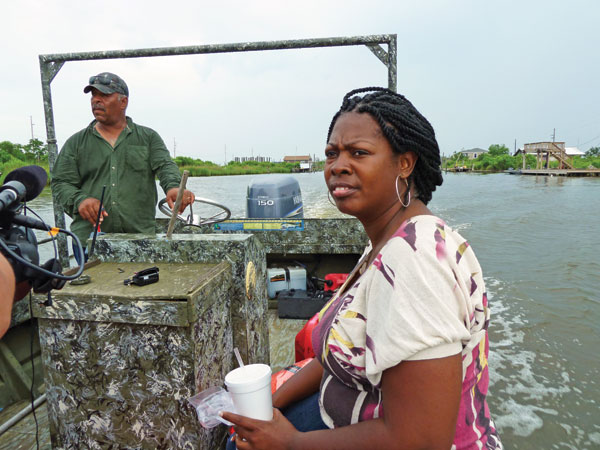 The government says that the millions of barrels of oil spilled into the Gulf are “dissipating.” But environmentalists warn about long-term effects. Does the “Mission Accomplished” rhetoric mean BP and the feds are bailing?

Not if Gulf women have anything to say about it.

In the current issue of Ms., Antonia Juhasz reports on the coalitions of women politicized by Hurricane Katrina who are working hard to save the Gulf and its people:

The women of the gulf are calling it “a man-made disaster with a woman-led response.” That’s because while the two main industries on the Gulf Coast, oil and fishing, are both male-dominated, it’s women who are now in leadership roles picking up after this latest mess—including providing support services that have become increasingly vital as more men are put out of work. As LaTosha Brown of the Gulf Coast Fund explains, “This is the South, and strong women have always dominated in the South.”

Prior to Hurricane Katrina, the few, small, understaffed and under-funded advocacy organizations and volunteer networks of the Gulf Coast worked in virtual isolation, cut off by the rural landscape, a lack of technology and funds, and a mentality of go-it-aloneness.

“What Katrina did was give us a reason to know each other,” explains LaTosha Brown, whose Saving Our-Selves (SOS) Coalition provided supplies and services to more than 5,000 Gulf Coast residents following the hurricane.

While the Katrina response built a united front, the storm decimated the region. Communities struggled, but in the past five years many were making their way back. Then came BP. This time, the women of the Gulf Coast were ready. Brown and many more like her have gone nonstop since the Deepwater Horizon blew up April 20, often without sleep, food and rest.

In her work as a microbiologist/chemist, Wilma Subra has been working with such nonprofits as the Louisiana Environmental Action Network (LEAN) and the Lower Mississippi Riverkeeper (LMRK) to protect the public from the toxins being released in both BP’s oil and its dispersants. She has spent the last few months fighting BP in court and with government regulators.

The decisions being made by the oil giant have significantly worsened the human- and environmental- health impacts, says Subra. The chemicals used in the dispersants, for example, are highly toxic, and workers coming into constant contact with them have not been provided with appropriate training or protective gear. Instead, it’s been up to community organizations to provide the necessary protection. When Subra meets with the workers and their wives, they report health symptoms such as severe headaches, nausea, difficulty breathing and dizziness—but they are reluctant to report their symptoms to BP for fear that they will lose their jobs.

The women of the gulf hope that the nation has learned two key lessons from Katrina: Local tragedies are ignored at the nation’s peril, and national solutions will be unsuccessful without local leadership, expertise and participation. These women also learned to ask for help. As one told me, “We didn’t budget for the nation’s largest oil spill.”

Excerpted from the Summer 2010 issue of Ms. magazine. To learn more about what women are doing to clean up the Gulf, pick up the summer issue of Ms. on a newsstand near you, or get it delivered to your doorstep by joining the Ms. community.

To send financial support and learn more about the organizations in this article, visit www.gulfcoastfund.org.

UPDATE: Check out the National Radio Project’s new segment “Beyond BP: A  Future Without Oil”, which features Author Antonia Juhasz. In the segment, listeners hear from experts in the Gulf Coast who explain why, despite the dangerous and deadly consequences, locals aren’t ready to turn their back on the oil industry, and what that means for the rest of us as we pursue a future free of fossil fuels.