For Latinas, A Fine Line Between Reproductive Justice and Eugenics - Ms. Magazine
Skip to content 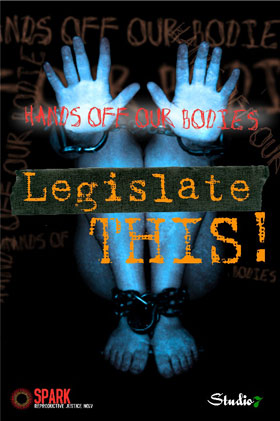 The advent of the birth control pill and legalized abortion were watershed moments for the U.S. feminist movement. At the same time, these advances continue to be bound to the race, class and economic status of those who have access to reproductive technologies.

U.S. Latinas and Chicanas, along with Native American and African American women, have a very complicated history with state policies about our reproductive practices. Chicana and Latina bodies often bear the brunt of the blame for “overpopulation” and “hyper-reproductive” capacities–and that blame is based on eugenics, the policing of the reproduction of those “less desirable” races in favor of creating a “superior” white race.

Today, conservatives in the U.S. claim that immigrant women have “anchor” babies or “jackpot” babies that will “act as an anchor that pulls the illegal alien mother and eventually a host of other relatives into permanent U.S. residency.”

Not only does the theory of the anchor baby frame the Latina body as “uncontrollable” in its reproduction, but it also criminalizes women for having children and, therefore, accessing social services. The implication is that all Latina women are not citizens, have too many children, can’t control their sex drives, have children to access U.S. citizenship by proxy and are to blame for the overtaxing of the U.S. welfare system. This could not be further from the truth.

These ideas about Latina women’s bodies and hyper-reproduction are not new. Feminist historians such as Elena Gutierrez, Natalia Molina and Laura Briggs have all documented how the state has long targeted Puerto Rican women and women of Mexican origin. Public health policies were often designed to demean and discipline the bodies of Latina women, casting their sexualities as “deviant.” The colonial desire to supposedly “save these women from themselves”–in actuality, to save the state from welfare costs–are localized in the figure of what Gutíerrez has called “the hyper-fertile baby machine.”

Most people don’t know that the birth control pill was first tested in 1957 on 132 women in Rio Piedras, Puerto Rico, three of whom died during the trial. Previously, in the 1920s and 1930s, scientists such as Raymond Pearl and Clarence Gamble, along with middle- and upper-class Puerto Rican elites, had raised money to fund eugenics-minded scientific experimentation that included the sterilization of women on the island to correct the problem of overpopulation.

The culture of poverty thesis–that certain groups are inherently prone to poverty–or the notion of the welfare queen (the Moynihan report’s finding that the black woman is the downfall of the black family and therefore responsible for its poverty), drove the mid-20th-century eugenics campaign in Puerto Rico. Even though the first Pill trials were performed on middle-class professional women who volunteered for the study, documentary filmmaker Ana María García’s film La Operación/The Operation (1982) shows that the pill was also tested in one of the poorest barrios of San Juan, La Perla.

One-third of Puerto Rican women on the island were sterilized because propagandist campaigns made sterilization fashionable without discussing the long-term consequences of the procedure (infertility). Garcia’s film suggests that poor Latina women’s bodies were a literal colonial laboratory; Puerto Rico is, after all, a U.S. colonial possession.

While my generation and those that have followed have clearly benefited from technologies such as the birth control pill, in vitro fertilization and abortion, I review the above history to remind us that these modern marvels were often tested on the bodies of women of color. Historically, there has been a very fine line between reproductive social justice and technologies being used to control our bodies.

There are amazing groups that focus on health and social justice for Latinas, including the National Latina Health Organization. Yet, I can’t help but think of a recent visit to the gynecologist (not my usual one, but an affiliate in the practice at the University Medical Center in Tucson), at which the doctor kept insisting that I consider an IUD even though I am unmarried and have no children. As a recently tenured faculty member with a hyphenated “Latino” name, this unwavering persistence that I need an IUD–or, rather, am a good candidate for one–and therefore not needing to reproduce, suggests that reproductive racism is alive and well, even for an Ivy-league educated Chicana. It makes me wonder how many other Latinas, educated or not, are being pushed to control their reproduction with this subtle racism that is the dark underbelly of reproductive justice.

Visit http://latinainstitute.org/LatinaWeek4RJ to read more posts like this, go and lobby for contraception to be covered by insurance under the new health care program here.