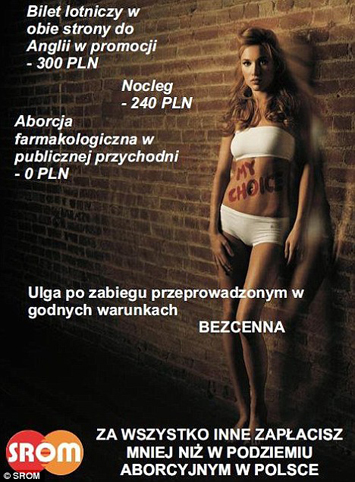 The European Pro-Choice Network, a new blog connecting pro-choice allies in Europe, has launched. Creator Sarah Diehl, director of the documentary Abortion Democracy, says it will help activists in EU countries support each other and make the topic of abortion access more visible.

Isn’t most of Europe already secure with legal abortion? Actually, no.

Diehl says many people take abortion access in Europe for granted. In her experience, abortion is not discussed in political terms–as a matter of self-determination for women–but morally, as a question of when life begins for the fertilized embryo. Abortion as a women’s rights issue is seen as old-school and no longer relevant, thus the ongoing struggle for safe and legal access to abortion is rendered invisible.

While pro-choice activists in the U.S. are rallying against anti-choice legislation on this side of the pond, European activists are facing similar challenges.

Anti-choice groups and politicians in the EU are on the rise, while abortion access is decreasing in countries where the procedure is already legal. In Salzburg, Austria, for example, doctors agreed under pressure from the Catholic Church not to perform any more abortions.

In Poland, politicians cut a deal with the Church to make abortion illegal in the 1990’s in return for party support. In the Netherlands, a country known for its liberal abortion policy, politics are shifting to the right after a recent election. The mobile abortion clinic-on-a-boat run by Women on Waves, which brought women from anti-abortion countries into international waters to receive the procedure under Dutch law, was grounded last year. European nations are also seeing an uptick in crisis pregnancy centers.

Under Communism, women in the Soviet Union never had the chance to create an independent women’s movement, says Diehl. So it was only in the 1990’s, with a newfound ability to criticize the state, that a women’s liberation movement began. For some people in former Soviet nations, though, an anti-abortion stance represents nationalistic pride, a nostalgia for the old ways. Says Diehl:

I think there is a new conservatism and nationalism coming up in Europe, and that always means that women’s rights are being used to express this, symbolically as well as in real politics.

The goal of the new blog is to connect pro-choice activists in Europe and to exchange information about anti-choice groups. In places like Poland and Ireland, where abortion is highly restricted, the blog may help women locate abortion services. Most posts are translated into multiple languages to reach a wide audience, says Diehl:

We want to use the Internet as a platform because there is a lot of lobbying and misinformation about abortion online, and it is crucial to use media … to oppose that: to educate women and girls on their rights, their options, and how to get legal or illegal safe abortions and not feel guilty about it … There is a lot going on under the feminist radar, which is dangerous, because I do think after working for five years on reproductive rights that we have to prepare ourselves for a huge backlash.

Above: an advertisement distributed by pro-choice groups in Poland. The posters, a take-off on a Mastercard ad, encourage women to come to Britain for free abortions to avoid the strict laws at home. The poster translates to: “Plane ticket to England at special offer–300 zloty (£70). Accommodation–240 zloty (£56). Abortion in a public clinic: 0 zloty. Relief after a procedure carried out in decent conditions–priceless.”

At the bottom of each poster–next to two red and yellow circles similar to the Mastercard logo–is written in Polish, “For everything, you pay less than an underground abortion in Poland.”