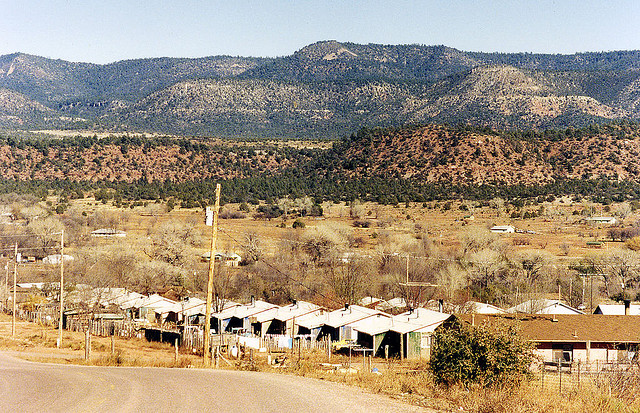 A special report published yesterday by The Arizona Republic reveals how federal authorities lied to the public about catching a serial rapist on the Fort Apache reservation in Arizona—and sheds light on how the justice system is failing victims of violent crime on Indian reservations across the country.

From 2005-2007, at least one serial rapist posing as a police officer spent two years sexually assaulting a minimum of 17 teenagers as young as 13 years old. The crimes were not investigated—and the public was not notified of the threat—until 6 months after the first rape occurred, when the Bureau of Indian Affairs (BIA) sent a task force to the reservation to look into the case.

But The Republic, which spent two years fighting for access to BIA investigative records pertaining to the case, found that the agents bungled the entire investigation, without regard for whether the real rapist was caught. Lack of evidence ensured that U.S. attorneys were unable to prosecute the suspects fingered by investigators, and a string of emails sent between BIA agents reveal that they knew the rapist was still at large:

In November 2007 … a BIA agent sent an e-mail, a copy of which was included in the files the agency tried to prevent The Republic from obtaining.

In the e-mail, the agent advised his colleagues that final DNA tests had come back negative: There was no physical evidence tying anyone who had been arrested to the rapes.

Another agent answered: “I guess we close the case and move on. Hopefully, 18 months down the road, we do not [hear] about 15 other rapes which . . . were not reported to BIA.”

A third agent asked his colleagues whether there had been more attacks with the same modus operandi, or patterns, since the case collapsed.

The response: “We have had 46 aggravated sexual abuse cases since our group disbanded. Things haven’t changed here at all … I think it’s hard to say [whether] our ‘trail rapist’ is still here, [has] moved or [has] changed his MO away from the uniformed approach.”

Despite that conclusion, the BIA closed its case.

To date, no one knows how many other younger women fell victim to the Fort Apache serial rapist, or how many men committed rapes using his Modus Operandi.

While it’s widely known that Native women experience violent crime at rates much higher than the rest of the population (with 86 percent of rapes committed by non-Native men), relatively little attention is paid to why that is.

The answer is both simple and convoluted: Violence against women is rampant on reservations because it can be perpetrated with impunity.

As a 2008 report by Amnesty International notes, violence against Native women is the result of the under-funding and under-training of tribal law enforcement agencies, as well as a tangle of jurisdictional issues which so often stall criminal investigations and prosecutions, leaving many victims without justice.

One major element of the problem is that the federal government has historically regarded tribal courts as too incompetent to adjudicate major felony cases. Therefore if such a crime is committed on tribal land, federal investigators, U.S. attorneys, and district courts must all be involved. Tribal courts similarly lack jurisdiction over crimes committed on Native land by non-Natives—whether those crimes are misdemeanors or major felonies.

Many of the worst crimes committed on tribal lands are never properly investigated because of the lag between when the crime was committed and when federal authorities finally step in. In the case of the Fort Apache rapist, that lag was 6 months long. The extent to which BIA agents bungled the Fort Apache investigation probably isn’t uncommon either.

Obviously, without sound mechanisms in place to sufficiently investigate and prosecute violent crimes on reservations, violent crimes will persist, and likely escalate.

Fortunately, the Obama administration is making some significant efforts to turn the problem around. As The Republic writer Dennis Wagner outlines in a follow-up article published today, Obama has taken several big steps to address the justice issues on reservations, including:

It’s not enough, by any means, but it is a small step in the right direction. Tribal law enforcement agencies should be provided the same level of funding and training as law enforcement agencies operating in every other corner of the Unites States. It’s worth noting that in Maricopa County—just a few hours away from the Fort Apache Reservation—Sheriff Joe Arpaio has cost taxpayers millions of dollars in his crusade to round up every immigrant in Arizona, while reservation police are so understaffed that they can’t even respond to every crime that is reported.

It’s time that the federal government stopped undermining tribal authorities and instead provided them with the resources that they need to police and govern over their own lands.