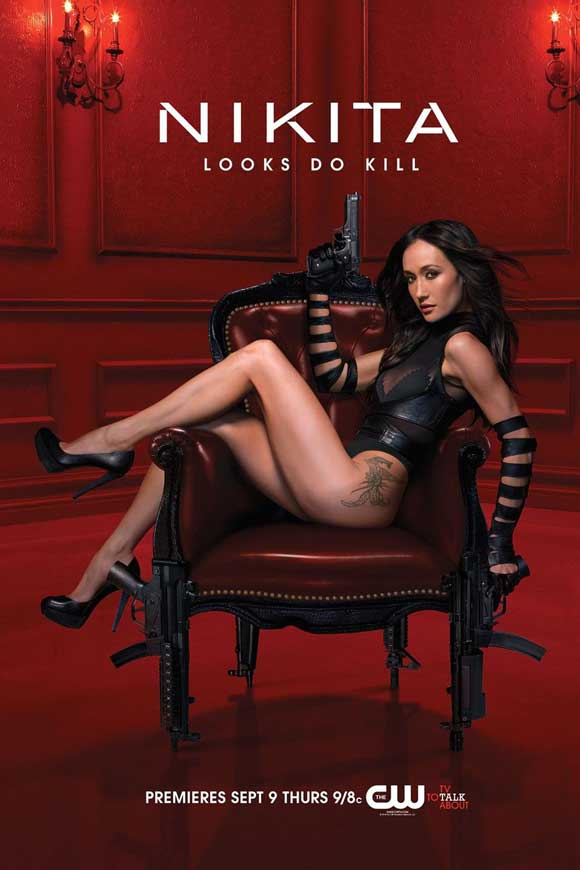 CW’s new TV series, Nikita, is actually the fourth time this tired plot is getting told. First there was the French movie, La Femme Nikita, and then, American writers went on a repackaging spree, turning it into a TV show twice (and now, a third time). A mere nine minutes into the first episode of this fourth take, my feminist writer’s soul started getting crushed. Then there were the abominable next 30 minutes. The following is a play-by-play feminist response to all the kyriarchy and lazy writing that is Nikita.

In the first five seconds, we learn that Nikita was forced to become an assassin by the government and escaped, determined to save others from the same fate.

Then there’s obligatory bikini scene in which a “hot” assassin kills a conventionally unattractive man.

Next, we learn that Nikita wanted to get out of the assassin business because…drumroll…she fell in love. But her organization doesn’t approve of romance–or people putting their guns down to go get married–and killed her man.

Back at the government camp where they train kidnapped misbehaved youth to become loyal government assassins, a few of the recruits are having a wee chat. White woman recruit gets in a scuffle with black woman veteran, until random white man comes along to break up the fight by physically restraining the veteran. She says, “I like it when you hold me that way.” The recruit gets called off to mini-charm school for assassins, and gets a sexy lecture from a sexy teacher about sexiness: “Embrace your beauty. Sometimes vulnerability is your greatest weapon.”

The show does have one thing going for it–Nikita is a really good assassin and beats up the boys. But maybe we shouldn’t be seduced by her capacity for violence, and instead see that it’s a front for embedding kyriarchal messages that further the status quo.