Easy A Earns Its Grade - Ms. Magazine
Skip to content 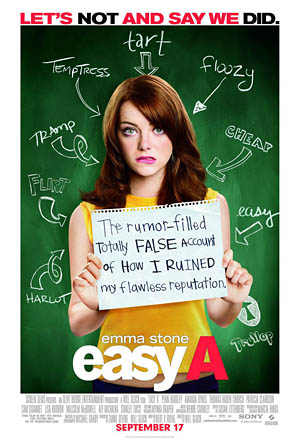 Easy A, a modern retelling of Nathaniel Hawthorne’s The Scarlet Letter set in an Ojai, Calif., high school, is now in theaters. Emma Stone stars as Olive Penderghast, a 17-year-old high school student who finds her good reputation sullied when a prissy and vengeful Christian classmate overhears her making up a story about losing her virginity. Rumors start flying, and almost immediately Olive becomes the center of attention at school. Things escalate when she agrees to help her gay friend Brandon, who is regularly harassed by homophobic bullies, by pretending to sleep with him to help convince the student body that he’s straight. Soon, other boys begin to approach Olive requesting the same services. Eventually she finds herself open for business–as a fake prostitute, who accepts money just for pretending she slept with a guy. She is ostracized for her rumored promiscuity, and quickly recognizes the parallels between her experience and that of Hester Prynne in The Scarlet Letter, the novel her class is studying. So, in an act of defiance, she decides to affix a scarlet letter A to her wardrobe. With each passing day new rumors emerge, and Olive soon finds that she’s in over her head. Ultimately Olive comes to terms with the fact, despite external forces that aim to define her by her alleged sexual behavior, that it’s up to her to define herself.

The film, and even more so Emma Stone’s performance as Olive, has been well-received by most critics. The Hollywood Reporter called it “an often hilarious and observant comedy about high school from the point of view of an extraordinarily smart and sagacious young woman.” However, even in praising the film some reviewers have betrayed an outdated, sexist way of thinking. Take Luke Y. Thompson’s review for E! Online:

Emma Stone makes for a refreshingly believable high-schooler in this comedy that also takes on hypocritical societal double-standards toward gossip and sex. Yep, we’re dealing with that extremely rare species: a big-studio movie aimed at teenage girls that’s also smart and funny enough to please boyfriends and parents.

Thompson’s snide implication that teenage girls aren’t as smart as their boyfriends and parents is insulting. It’s also rather ironic that he would incorporate a double standard toward gender and film appreciation to praise a movie for taking on “societal double-standards”. That’s kind of like saying that a documentary that exposes the evils of xenophobia is so well-done that even stupid immigrants will understand it.

Easy A is indeed a rare species, but not for the reason that dismissive critics like Thompson suggest. It’s true that the film contains a few cliches, such as casting a gorgeous woman to play the supposedly unremarkable girl who is inexplicably invisible to her classmates, or the stereotypical fat kid who soothes his insecurity with chocolate bars, or the caricature of loathsome Evangelical Christian fanatics. But ultimately the film advocates for tolerance and roundly denounces homophobia and slut-shaming. As Keith Phipps wrote for the AV Club,

Easy A has a deep concern with sexual double standards and the shunning that awaits those who don’t conform to them, from gay kids to sexually assertive girls to dateless introvert boys.

Easy A shows teens and tweens a young woman who has agency, and who uses it to defy taboos and subvert the dominant norms about appropriate sexual behavior. Also, it manages to cast a critical eye on the male gaze while simultaneously entertaining 10th graders. The film is funny throughout, and usually bigotry and ignorance are the butt of the joke. It’s also sincere enough to credibly criticize the scrutiny that young women and men face about their sexuality.