George Clooney Is a Bachelor, Kim Kardashian Is a Spinster - Ms. Magazine
Skip to content 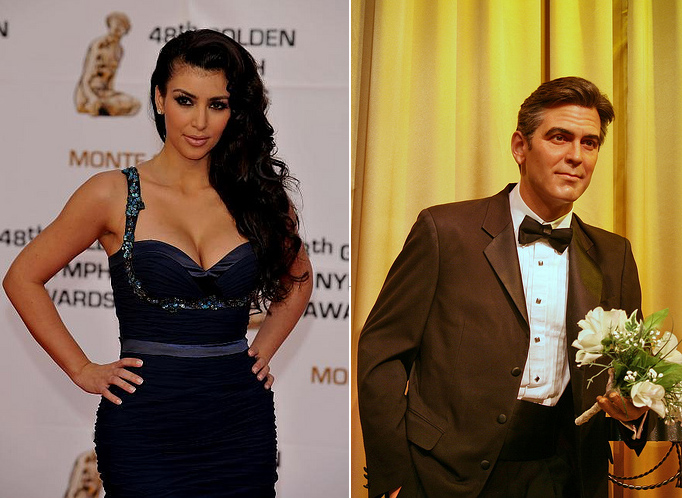 It’s official. As Kim Kardashian approaches her 30th birthday in October, she is joining the ranks of women such as Jennifer Aniston and Jessica Simpson: modern-day spinsters. There’s no comparable expression for men, such as 49-year-old unmarried George Clooney, who has traipsed around the globe parading a rotating bevvy of babes. Oh wait, he’s a bachelor.

As Jessica Valenti writes in He’s a Stud, She’s a Slut, and 49 Other Double-Standards Every Woman Should Know:

They’re bachelors, with cool apartments and the freedom to do whatever they want without judgment. Sure, they may catch occasional shit from their mother about “finding the right girl,” but for the most part they’re respected. Single women, on the other hand–especially single women who have the gall to be over thirty–we’re old maids. Spinsters. Desperate to be Bridezillas and moms. There’s no such thing as a happy single  woman. We’re all just wives-in-training or crazy cat ladies. There’s something about unmarried women that society just doesn’t like. That’s why the media is constantly telling us how miserable single women are.

Like celebutante-turned-mega-brand Kardashian. In addition to the standard hoopla about the reality star’s cleavage, her famous curves or her appearance at a variety of red-carpet events, the media has increasingly honed in on her personal status, which mere months ago when from “in a relationship” to “single” after she and football star Reggie Bush called off their on-again, off-again relationship.

Take last month’s group chat with George Lopez (sitting in for Larry King) with most of the major players in the Kardashian-Jenner clan. Naturally, most of the interview questions were directed at Kim, and they kept swinging back to her single status. Lopez made comparisons to Kim’s sisters– Khloe, who married Lakers star Lamar Odom, and Kourtney, who recent gave birth to a child–hoping that she’d admit pangs of jealousy. Is it weird to be the only unattached sister? Is she lonely? Didn’t she think she’d be married by now? Did she want to get married? Blah, blah, blah.

In the interview with Lopez, Kardashian didn’t take the bait. She said that while she imagined herself married with children by 30–and still wants that someday–her single status has given her the ability to achieve things she dreamed of. Still, Kardashian is not framed as an powerful, independent woman able to make conscious decisions about her own life, but as desperate and unable to make wise choices. There must be something wrong with a woman if she’s over 30 and single.

Interestingly enough, Kardashian, Aniston and Simpson have all been previously married. Given this, one would logically assume, as my friend Theresa puts it, that “you can’t go back to being a spinster, just like you can’t go back to being a virgin.” Well, apparently, in our culture you can do both. Meanwhile, eternal bachelor George Clooney goes about his single-man business with few questions–because he’s independent, she’s pathetic.

While I have been quite vocal about my issues with Kardashian’s rise to fame, her incessant focus on her body and her mixed message of empowerment while hawking diet pills and seeking cosmetic surgery, I don’t condone the media’s increasing focus on her relationship status and the countless double-standards contained therein. Despite women’s increasing numbers in education and the work force, women are still viewed as “naturally” interested in relationships, especially the heterosexual kind that culminate in marriage and children. Ultimately he’s gonna be a success, she’s gonna be a stay-at-home-mom. In fact, Kim’s focus on her work is presented as one of the major obstacles to finding true love.

Kim’s “pickiness” is also cited as a detriment to obtaining the picture-perfect fairytale romance. If she didn’t set the bar so high, she might finally find a mate. I don’t hear anyone chastising “hot guys” for only dating “hot women. ” There’s a big, fat double-standard when it comes to physical attractiveness and gender. I mean, really, when do men “date down”? Why should Kim have to settle?

I don’t tout Kim as a feminist role model, I don’t think her decision to remain single and focus on her career is a political statement and I don’t see her pointing out the double-standards–but I’m happy to do so.

Photos of Kim Kardashian and a waxy George Clooney from Flickr.com users Kalumba2009 and cliff1066 through Creative Commons License 2.0