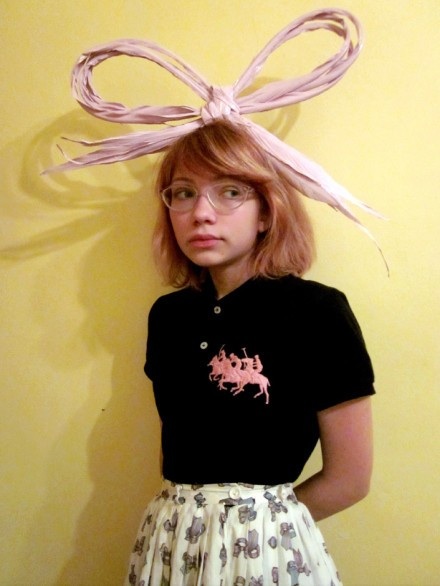 Tavi Gevinson is a feminist. When I ask her if she would call herself one she wholeheartedly agrees. At 14, she has recently started high school and gave a presentation about Riot Grrrl in her favorite class. She is known in class for being “the feminist” after her presentation, but it isn’t a big deal. (I did the same thing in high school, with less favorable results.)

What is a big deal is what Tavi has already accomplished: She started writing a wildly popular blog, The Style Rookie, at age 11. Her blog focuses mainly on fashion; She posts her own outfits and wittily reviews new collections. When recently reviewing designer, Christopher Kane’s resort collection, Tavi commented on the fluffy shoes:

I would sit in a giant swivelly chair and pet them, if I owned them. Plus, they help to differentiate the idea of nebula prints [on the dresses] from something futuristic or natural; they’re wonderfully tacky and feel sorta Clueless (Dionne, maybe Ambular, not Cher).

The fashion industry took notice, and Tavi has sat front row at fashion shows, written articles for Harper’s Bazaar, contributes to Pop’s blog and styled a shoot for BlackBook.

Tavi loves fashion and the people in the industry. “I think that most of the people I’ve met are just really passionate and want to be creative and want to be expressive. And I think that is amazing.” While she loves fashion, though, she has no problem critiquing some of the ethical issues in the industry. On her blog, she took on Terry Richardson’s pervy ways, for example. And during our conversation she mentions lack of diversity, abuse of models, unrealistic beauty standards and exploitative labor practices among garment makers as problems that the resistant-to-change fashion industry should address. “They see no reason to change,” she says.

On her blog, Tavi has lamented the loss of Sassy magazine, related to Daria Morgendorffer from MTV’s 90s animated show, Daria and reviewed Marissa Meltzer’s Girl Power: The Nineties Revolution in Music. She says she became aware of feminism just last year, through feminist blogs and links posted on Twitter, but experiences at school helped to make it resonant for her.

Like when we watched Rear Window in class and the one guy tries to force the lonesome woman who lives downstairs onto the couch and all the guys [in class] cheered. It was an example of rape culture right in front of my face.

She’s still figuring out feminism for herself, but sub-movements like Riot Grrrl stand out for her. Riot Grrrls, she says, did the opposite of everything they were told to do. They were loud, created music and wrote zines–which played off of feminist theory but were comprehensible to everyone. She acknowledges that feminists like Riot Grrrl icon Kathleen Hanna and blogger/author Jessica Valenti are sometimes criticized for being girly and making feminism “fun” and accessible–but that’s what draws Tavi to feminism.

I can go to school and be ‘the feminist’ and explain things really technically and read about feminist theory. But when you’re really frustrated like if I’m really fed up having to live in a sexist world, I don’t want to read a complicated essay. I want to listen to girls screaming.

Tavi’s love of Riot Grrrl goes hand in hand with her love of Sassy, the ’90s teen feminist staple. She’s written posts about Sassy and posted a letter to Seventeen magazine on her blog, reaming it about a cover headline. She says of media aimed at teens:

We need a voice that can sift through the bullshit and weed it out. There needs to be more feminism. There needs to be less emphasis on boys. Seventeen doesn’t emphasize companionship, it emphasizes boys, and that is exclusive to straight people. I think it is important to encourage girls to be loud. There can’t be all these negative messages. A big thing [to be addressed] is the beauty standard and slut shaming. There are so many double standards there.

Tavi feels that teenage girls should explore the real root of the self-hatred so many feel: “It’s easier to know that nothing is wrong with you when you know that these images [of ideal beauty] are being created by people who want money.” Getting teen girls involved in feminism would help alleviate some of this self-hatred, too, she believes, and would love to see a Sassy 2.0 to help get the message across. Also, presenting teen girls with more images of strong women may be a way to get them involved in feminism. Tavi is doing her own feminist organizing: She tried unsuccessfully to start a feminist group at the end of 8th grade, but she wants to start one at her high school and feels that people would join this time.

I mention when I was 14, I would have never called myself a feminist (even though I was one), and we agree that there are many people out there like that. “I think a lot of people are feminists,” Tavi says, “but don’t want to label themselves.”

Photo from The Style Rookie. 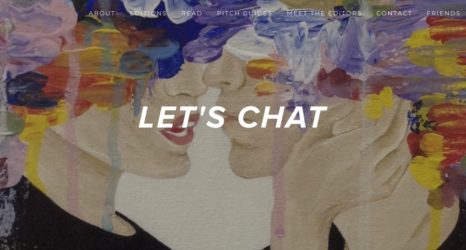 From Zines to Blogs: Exploring the Evolution of DIY Feminist Media