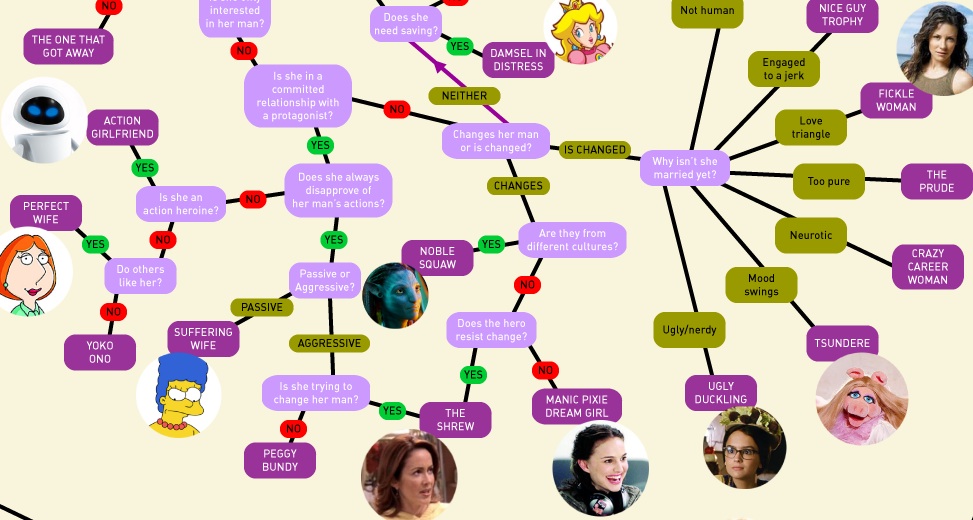 Above is a detail from a wonderful flowchart breaking down the complex system of assigning female characters to cliched, stereotypical roles (via Jezebel, originally from Overthinking It).

Sociological Images has a good collection of campaign ads that exploit anti-immigrant sentiment and racialized fears.

Jorge Rivas reports for Colorlines that Bill O’Reilly learned nothing from yesterday’s heated exchange between him and the hosts of The View, during which he drove Whoopi Goldberg and Joy Behar to walk off stage when he exclaimed that “Muslims killed us on 9/11”.

From Overthinking It: A post questions just how “modern” the families are on Modern Family, pointing out:

The paradoxical position of homosexuality in the universe of Modern Family. It’s okay to be gay–as long as you don’t get too demonstrative about it, and as long as in you’re utterly bourgeois in every other respect.

And finally, did you know that today is World Rural Women’s Day? Well it is! Check out some of the suggested actions posted over at La Vida Locavore in honor of the occasion.

Above: The Female Character Flowchart, from overthinkingit.com