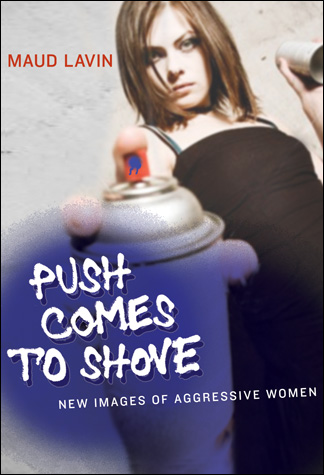 For a book that might be mistaken for a treatise on violent women, Maud Lavin’s recent Push Comes to Shove covers territory of another kind: specific case studies of women’s aggression as heard in pop music, seen in films and increasingly experienced in professional and private settings over the course of the last decade.

Lavin argues that aggression, historically linked with poor women and treated as low-class behavior, has become normalized across race and class lines. From the rise of powerful female rappers like Salt-N-Pepa in the ‘90s to films like Kill Bill in the ‘00s, we’ve witnessed the trend-turned-convention of women as avengers and vigilantes in the media. We’ve also seen an increase in powerful female role models even beyond overtly aggressive Buffy the Vampire Slayer-type heroines. Women’s boxing has become as much an exercise routine at the gym as a competitive sport, and films like Bring It On have helped redefine gendered competition.

Aggression isn’t necessarily about harming others. Lavin points out that women’s aggressive behavior is often staking claim to space and identity rather than creating conflict. Radical dissent and street activism are just two ways in which women’s aggression is manifested for positive social change. Indeed, some forms of women’s aggression blur the lines between marking identity and entitlement.

When it comes to sex, aggression is also tied up with everything from lust–consensual sex initiated by uninhibited female partners–to sexual violence. Lavin ties aggressive sexuality to the work of black artists such as Kara Walker and erotica writer Zane, both of whom have arguably reclaimed the stereotypical hypersexualized images of enslaved black women that often dominate portrayals of black women’s sexuality in American media. While no book can be all things, it is admittedly frustrating that Lavin’s focus on aggressive sexuality focuses exclusively on black women, as if to reinforce the very stereotypes she seeks to undo.

Interestingly, the book never actually focuses on unjustified female violence. There’s no overview of female serial killers or infanticide–perhaps because other scholars, whose main focus is often one particular type of female violence, cover these specific topics. While Lavin could have easily looked at vandalism, robbery or stalking through the lens of women’s aggression, her study focuses on contemporary art or female boxers who upload sparring session footage to YouTube.

Lavin’s wide-ranging examples provide a framework for understanding female aggression, its portrayal in the media over the last two decades, and what it means to embrace something which can still be used to cause harm and inflict violence. As someone who used to box, who has chased harassers down the street and has let loose her share of epithets at ex-boyfriends, this academic overview of women’s aggressive behavior is welcome food for thought. Reading it during Domestic Violence Awareness Month, when TV shows have featured female-on-male domestic violence, it seems that a broader conversation about female aggression, for better or worse, can’t come soon enough.