"For God, For Country and For Men": A Yale Alumna Speaks Out - Ms. Magazine
Skip to content 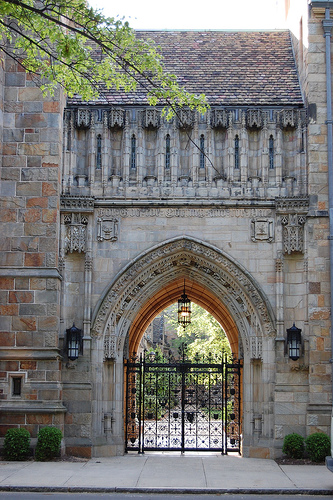 When incoming freshmen enter their Yale dorm room for the first time, they encounter a blue banner with white lettering that reads, “For God, For Country and For Yale.”

Initially this banner strikes many–including my freshman self four years ago–as outdated and overly earnest. But allegiance to Yale ends up sticking with many students and graduates, preventing us from seeing any flaws and, most problematically, from speaking out against the school. At least that has been my experience–until this last week.

In light of the current controversy over the fraternity DKE and their recent initiation activities–which included a crowd of men parading around the freshman housing quad shouting, “No means yes and yes means anal”–I wanted to follow up Michael Kimmel’s insightful Ms. Blog post with my hopes for an eventual positive outcome to this dismaying event.

First, an update: As if Yale wanted to dig itself deeper into its hole of offensive language, the school’s most prominent newspaper, the Yale Daily News, published an editorial by the staff entitled “The Right Kind of Feminism.” Rather than offer an opinion on the news story itself, it focused on the faults and radical nature of the campus Women’s Center and engaged in classic victim-blaming. Presumably written by the paper’s two men opinion editors, the article included such gems as:

In recent years, the radicalizing echo chamber of the Center has failed to represent the broader spectrum of women on campus after acts of public misogyny. While the Center spent their time painting murals of their own vaginas, the rest of women were left without a public voice.

As the Center responded with histrionics, what could have been an opportunity for our campus to maturely and gracefully reprove public stupidity and affirm mutual respect turned into a daylong, private spat.

And, my personal favorite:

Feminists at Yale should remember that, on a campus as progressive as ours, most of their battles are already won: All of us agree on gender equality.

Really? Beyond the message itself–which condemns the Women’s Center for their “radical” “overreaction” and patronizingly reassures feminists that our fight is over–the article is imbued with gendered language. While women responded with “histrionics,” DKE men are simply “boisterous,” “impressionable,” “foolhardy” and “young.” To hear the Yale Daily News tell it, these DKE men are no more than well-intentioned but foolish children at the mercy of angry, aggressive and irrational mother figures–i.e., the Women’s Center.

Subsequently, the Yale Daily News published a slew of additional articles, including a halfhearted clarification, an excellent op-ed from a woman student and a graceful response from the (male) student body president. There is also a petition circulating that urges university Yale president Richard Levin to publicly denounce DKE’s actions. I  urge anyone affiliated with the school (currently signatories are limited to current students, alumni, parents of students or alumni, or faculty or staff members) to sign.

As I was signing, I realized that something positive could come out of this entire incident. This is the first time in a long time that so many diverse voices are engaging the issue of gender on campus. While the Women’s Center has been quick to respond to acts of misogyny in recent years (such as the “We Love Yale Sluts” incident), the remainder of students, alumni and administrators have, by and large, remained silent–seeking comfort under the banner of allegiance and history. But too much of this history relies on the unspoken assumption that “boys will be boys.” While in much of the country this mantra is now an excuse, at Yale it remains a tradition.

It’s time for this tradition to change, and the administration should lead this shift. Administrators such as Melanie Boyd, special advisor to the Dean of Yale College on gender issues, are already working to improve the campus culture for both men and women students, but they need more official support. Even the Delta Kappa Epsilon International Fraternity Board of Directors has reprimanded Yale’s chapter, telling them to temporarily cease all pledge activities, including accepting new pledges. When an international fraternity organization publicly recognizes an incident and takes disciplinary action, it’s clearly time for the university’s administration to do the same.

I urge President Levin to speak out against DKE’s actions. If you’d like to encourage him as well, here’s how to contact his office:

Photo of Yale gateway, above which is inscribed “For God, For Country and For Yale,” from Flickr user Poldavo under Creative Commons 2.0.