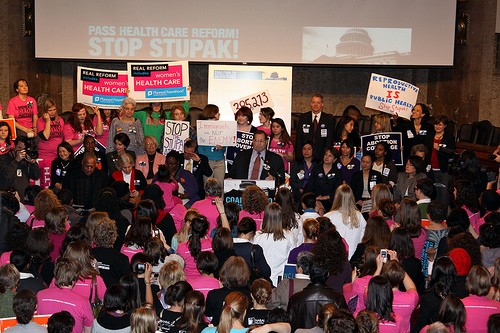 Now, it turns out that the “Nelson compromise” in the final Patient Protection and Affordable Care Act–which allows patients to pay separately for abortion coverage from private plans in state insurance exchanges, but allows states to opt out of providing plans with abortion coverage and doesn’t allow abortion coverage in federal-subsidized plans–see the last paragraph here for a more detailed explanation—-weren’t draconian enough for anti-choice leaders.

Says Susan A. Cohen, author of a new report for the Guttmacher Institute:

Antiabortion advocates have unveiled a radical agenda aimed at eliminating abortion coverage from any health insurance plan that in any way touches a public dollar, whether directly or even indirectly under the tax code.

The Republican Party’s “Pledge to America” declares “We will permanently end taxpayer funding of abortion and codify the Hyde Amendment.”

They are thus taking direct aim at employer-provided health insurance plans which “are exempt from taxes for both employers and employees,” explained Adam Sonfield, senior public policy associate at Guttmacher. The No Taxpayer Funding for Abortion Act, introduced by Rep. Chris Smith (R-N.J.) in July, would prohibit “any tax benefits for amounts paid or incurred for an abortion or for a health benefits plan (including premium assistance) that includes coverage of abortion.”

Antiabortion activists are aggressively using the bill as a whole to demagogue against abortion as health care and, when the new Congress convenes, they have promised to look for legislative openings to advance its various individual provisions. It’s clearly an attempt to keep abortion rights advocates on the defensive and stop them from working to reverse some of the damage done to abortion rights during health care reform.

In addition to Smith’s bill in Congress, 12 states have introduced bans on abortion coverage by state health exchanges when they’re established in 2014. Five states (Arizona, Louisiana, Mississippi, Missouri, Tennessee) have already voted for the ban. We can expect more action once the elections are over.

We can’t remain quiet about this; we have to make sure policymakers, politicians and insurers recognize that abortion is a critical component of our health care and that we will not be ignored.

There have been more than 45 million legal abortions performed in the United States since Roe v. Wade was decided in 1973. If just a small percentage of every woman who exercised her constitutional right to safe, legal abortion contacted her elected officials and expressed her support for a woman’s right to have abortion covered like any other medical expense, we could turn this around. Isn’t it time?