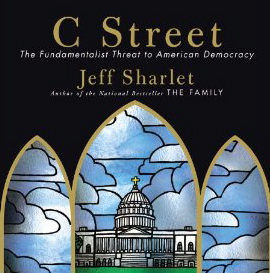 Sharlet’s new book, a follow-up to his bestseller The Family: The Secret Fundamentalism at the Heart of American Power, leads with the sensationalized Sanford/Ensign/Pickering scandals, but reprimands U.S. reporters for salivating over sex and hypocrisy. The real story–the dark and terrifying one–has to do not with these men’s personal desires but rather with the nefarious global reach of C Street, a Washington, D.C., boarding house and base for Family activities, and a place where all three men spent extensive time.

Jokingly called by its own members a “Christian mafia,” the Family promotes a brand of authoritarian, anti-democratic paternalism. Sharlet explained, in a recent interview, the sleight of hand that dresses up the harsher aspects of this worldview:

Within this paternalist framework, “Women submit to male headship,” says Sharlet in his latest work,

… because men sacrifice, or at least make it clear that they’d be willing to sacrifice, in defense of womanly virtue. It’s an even exchange, goes the thinking; the relationship is ‘separate but equal,’ husband and wife each able to claim the title of ‘servant leader.’

The Family operates by tapping powerful political figures, mostly men, to serve as its ambassadors around the world. The group sets up “cells” in foreign countries, cultivates ties with leaders and enforces a “code of secrecy.” Members (who don’t call themselves members, but instead might say they work with the National Prayer Breakfast, the organization’s only public event) view themselves as engaged in “spiritual warfare” that requires “spiritual weaponry.” They employ what Sharlet describes as the “most violent metaphors imaginable … as maxims for everyday living.”

He devotes a section of the book (Chapter Five) to the pervasiveness of evangelical Christianity in the U.S. military. When communism was no longer perceived as the major threat to U.S. security, he explains, fundamentalists found a foothold within the military. “Adherents could not be against communism, godlessness–they had to be for–the active advance of a Christianity defined according to struggles not between nations but between ideas.” Sharlet notes that “more than two-thirds of the military’s 2,900 active-duty chaplains today are affiliated with evangelical or Pentecostal denominations.”

Captain McLinda Morton, a former Air Force Academy staff chaplain, was disturbed by the influence of what Sharlet calls “an ethos now echoed by personnel up and down the chain of military command: faith first, family second, country third.”

Captain Morton realized what was happening when female cadets began telling her they were giving up their coveted pilot slots to pursue ‘God’s purpose.’ ‘These women were being counseled by their AOCs [air operations commanders] that what God really wanted them to do was to bear children and be someone’s wife.’

Morton was alarmed not just as a chaplain and as a woman but as an officer–fundamentalist AOCs were deliberately sabotaging a competitive system designed to produce the best pilots. The results will ripple outwards for years, as women who passed up their wings are passed over for promotion, creating an office corps shaped by religious orthodoxy at the expense of ability.

In The Family, Sharlet spoke of “the fundamentalist preoccupation with ‘family'” and the fixation on defining family to exclude “gay couples… [and] any combination not organized around ‘biblical’ principles of ‘male headship.'” In the military, this can no doubt be linked to lingering support for Don’t Ask, Don’t Tell; in the global network the Family has built, the tentacles reach to Africa and the Uganda Anti-Homosexuality Bill. It’s not surprising to learn in C Street that this notorious piece of legislation, which aims to impose the death penalty on gays and lesbians and imprison those who fail to report homosexuals, was almost called either the”Safe Family Bill” or the “Save Children Bill.”

C Street is a testimony to the power of engaged, naming-names investigative journalism. This is not a book for the faint-hearted. Read it and find out what’s at stake in the culture wars. As Sharlet points out,

Fundamentalism is a subtler religion than we realize; the end is just a metaphor for tomorrow, and today there’s still time for business as usual. Patience, not apocalypse, is the watchword of American fundamentalism. Not waiting for the Kingdom, but building it slowly, brick by brick, a foundation strong enough to endure any electoral tides.