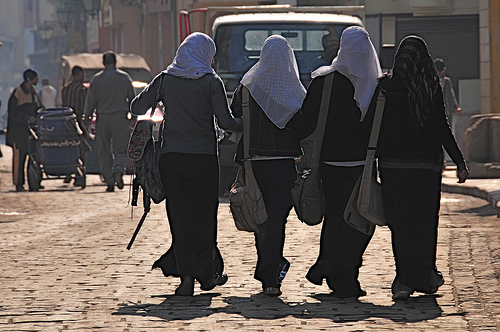 After the call–hey pretty lady–comes that split-second in which you must decide how to respond. Reply sweetly? Duck for cover? Pull your coat tighter and walk faster, silently wishing you weren’t a woman alone in public–or, maybe, that the public wasn’t so hostile to women? 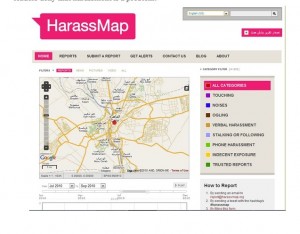 According to the Associated Press, Egyptian women will be able to report the unwanted attention through text message or Twitter, and their information will be loaded onto the map, which in turn will not only inform other residents, but also activists, media and the police. This website is of particular need in Cairo, where a 2008 survey by the Egyptian Center for Women’s Rights found that 83 percent of Egyptian women reported being harassed on the streets, and half of those women said the abuse occurred daily. Egyptian activists are hoping that mapping the abuse will raise awareness and pressure parliament to pass a bill making sexual harassment a criminally punishable offense.

Harassmap will graph what feminists and some urban studies experts have long recognized: City streets, especially at night, are gendered spaces where men dominate. In Bodyspace: Destabilizing Geographies of Gender and Sexuality, Nancy Duncan explains how such gendering of urban spaces reinforces women’s exclusion from not only city streets, but all public life:

A catcall aimed at a woman walking home at night not only reshapes her as a distinctively female subject, but also reshapes the whole scene: She becomes vulnerable, the man menacing, the public sphere a place for men and her destination–home–the sole refuge for women.

Even advice such as “don’t walk home alone,” which women may give to other women, compounds the effects of catcalls. In Turf Wars: Discourse, Diversity, and the Politics of Place, Gabriella Gahlia Modan cites Carol Gardner to explain how women’s traditional advice to other women (such as mothers to daughters) is another form of discourse that shapes the streets:

Etiquette books, advice columns, crime-prevention experts, and conventional wisdom all advise against women spending time alone in public places. … [Gardner also] shows that it is a matter of course for men to make comments to women on the street, but not vice versa. Such unequally distributed public address rights also constrain women’s access to public space and acceptable means of self-protection.

This website, therefore, works on many levels to counteract the effects of catcalls. It gives women a forum in which to speak out–to other women as well as to the media, police and public officials. And the public nature of the website itself affirms women’s right to be in public spaces.

The danger is that a map of the harassment will serve to re-inscribe the status quo–now with detailed geographic coordinates. As the Associated Press states (apparently without considering the long-term social impact), the website can be used prescriptively, “to show hotspots and areas that might be dangerous for women to walk alone.” Of course, the goal isn’t to make the city even less accessible for women, which is why Egyptian activists are viewing this map as merely a starting point, not as a substitute for legal progress. Yet the website also holds promise: Plotting the current reality could ultimately fuel a new, ungendered map–for not only Cairo’s streets, but for all of Egypt.

ABOVE: Women walk together though Cairo’s bazaar from Flickr user Ed Yourdon under Creative Commons 2.0. Photo of HarassMap from Fast Company.com