For the Love of Freedom and Fashion - Ms. Magazine
Skip to content 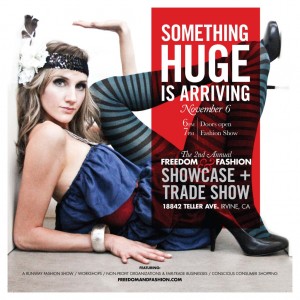 The founder and president of Freedom and Fashion describes herself as a slave to end slavery. Constantly networking, fundraising, and sometimes sewing by hand in the dimly lit rooms of friends and family until 4am, Bonnie Kim and her board of directors work in the background to support fair trade organizations and NGOs that raise awareness about and provide resources for victims of human trafficking.

On Friday Nov. 6, 2010, at 6pm in Irvine, Calif., Freedom and Fashion will embark on their second annual showcase and trade show. Attendees will view the fashion designs of labor and sex trafficked survivors, non-profits working to end slavery, and fair trade companies. A video introduction to each organization will accompany the fashion preview; goods will be on sale before and after the show.

I asked Kim what neophytes should expect.

Their minds will be blown away. Period … It’s kind of fun being underestimated sometimes because we’re a nonprofit and people associate nonprofit with very janky stuff or ugly things … but we produce really high production value … We try to do it very top-notch quality for that reason … We set a new platform for what it means to look like a non-profit, and not look like a non-profit.

The show will also feature vocal performances by Dr. E née Dr. Elaine Richardson who is not only a fashionista, but a professor at Ohio State University, a survivor of sex trafficking, and author of the forthcoming book PGD to PhD: Po Girl on Dope to PhD. Dr. E is excited to work with Freedom and Fashion.

I love what they’re doing—turning fashion on it’s head, using it to save women and girls, inform people about the human misery that is going on around the word. It’s creative, it’s environmentally conscious, socially conscious. It’s inspiring.

It’s fun … Fashion is an avenue that is cool … It gives us an opportunity to expose the truth slowly.

The truth is that sex trafficking is the second largest crime industry in the world. Dr. E defines sex trafficking as “women being sold like drugs or other commodities.” She clarifies:

Some people’s attitude is that adult prostituted women are not sex trafficked but sex workers and that they should be treated as criminals. This leads many would be caring human beings to be apathetic toward women who are raped, beaten or killed while they are in the throes of prostitution. Some people have more compassion for women and girls who’ve been kidnapped and traded internationally than for women within America. I think that most women involved in prostitution have psychological and emotional trauma like battered women and many are also drug addicts and need treatment.

I know sex sells here, but it creates a lot of pain … Sex has been totally misrepresented in today’s society. Because of it I feel like it perpetuates industries like porn and industries like human trafficking. Unless we address these issues, this problem is just going to continue and get worse—women ending up being sex slaves or them feeling the need to, in order to survive, resort to prostitution or being in the trade. And that’s more overseas than here, but many times girls here for the love of someone else they would just easily give themselves away … and it’s not supposed to be like that.

These women working for the love of freedom and fashion are giving as Kim says “the best of the best for the least of the least” for their show on November 6.

In addition to the annual show, Freedom and Fashion, hosts smaller previews, hopes to acquire Los Angeles office space soon, expand to a New York City division, and develop an after school program that teaches young girls to sew and informs them about the dangers of sex trafficking. Donations are appreciated.

Image used with permission from Freedom and Fashion.