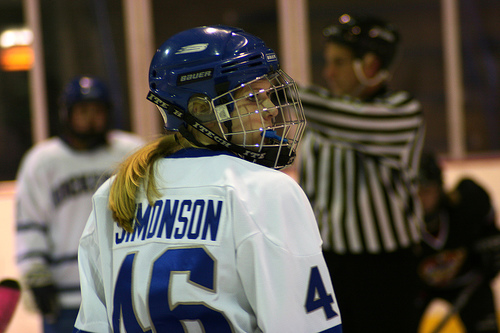 As a little girl growing up in Toronto, Canada, learning to ice skate was a non-negotiable–part and parcel of our below-freezing weather that lasted three to five months of the year. I took it one  step further: Beginning at age 4, I was the only girl on a “co-ed” hockey team which practiced several times a week, including twice weekly at 6 a.m.

I wanted so badly to be good at hockey. But even with a woman coach, I sat cold and benched for 90 percent of every game. Was it because I sucked? Probably, though I bet getting the chance to actually play the game would have improved my skills. (I went on to be a pretty good figure skater, so I knew I wasn’t just bad at skating.) But where were my women hockey role models? Certainly not in the Hockey Hall of Fame.

That is, until today. At long last, two incredible women hockey players have been inducted into the Hockey Hall of Fame: Canadian Angela James and American Cammi Granato. The latter told Reuters:

I didn’t really understand how big this is but now I’m seeing the magnitude of it and understanding we are the first to go in and thinking what it means for women’s hockey.

Congratulations, James and Granato! Let this first induction pave the way for future women hockey players, and serve as inspiration for all the little girl hockey players out there looking to make it to the Olympics and beyond.