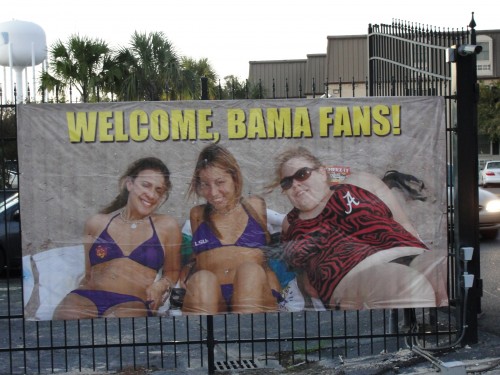 How about some school pride at the expense of women?

Here’s a banner that is currently on display at an apartment complex near Louisiana State University (LSU), presenting two supposed LSU fans and one University of Alabama fan in anticipation of a recent football game between the two rival teams.

As my LSU friend (who originally spotted the banner) notes, “it is obviously sexist, fat-phobic and caters to a male gaze and sports rivalry through objectification of women.” Individuals from two feminist organizations at LSU, WOW and WGSGO, repeatedly called the apartment complex to ask that the banner be taken down.

It’s a perfect example of how fat bodies are both themselves stigmatized and used to stigmatize others. In this case, not only is this individual woman being mocked, but marking her as an Alabama fan serves to mock and denigrate all other fans by association. Because, as we all know, the campus with the hottest (according to conventional standards of attractiveness) chicks wins!