Waterboarding in the Living Room - Ms. Magazine
Skip to content 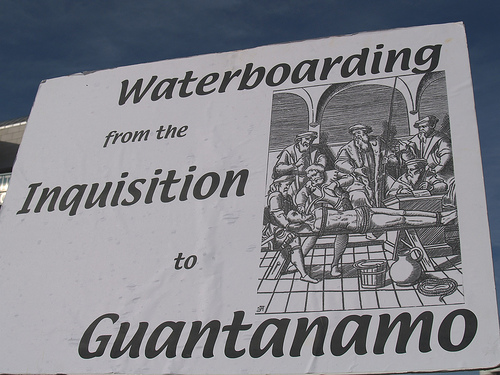 Twenty-two-year-old Trevor Case has been sitting in a Nebraska jail since late last month for allegedly waterboarding his girlfriend. After accusing Danielle Stallworth of cheating on him, according to police reports, Case tied Stallworth to the couch, stuffed socks into her mouth, bound her wrists with belts and hair ties, placed a shirt over her face, and poured a pitcher of water over her head so she would believe she was drowning.

Case’s decision to waterboard a girlfriend he thought cheated on him should come as no surprise. In fact, it offers a glimpse into a U.S. torture culture that relies on salvific violence, misogyny and legal hypocrisy.

In his 2008 article “Torture and Religious Practice,” William Schweiker traces the Christian roots of waterboarding, which was used, for example, during the Spanish Inquisition and in the persecution of Anabaptists during the Protestant Reformation. Schweiker argues that waterboarding is religious violence, not only due to its pedigree but because it carries a particularly religious meaning: that it functioned as a kind of baptism.

Since the Anabapists rejected infant baptism in favor of adult baptism, to take one example, King Ferdinand declared drowning a “Third Baptism,” and an appropriate response to their heretical practices. Schweiker writes that waterboarding-as-baptism was presented as a way to “save” the person being tortured by delivering the accused from his or her sins. Torture became punishment for sins, and punishment became an act of mercy and salvation.

As Schweiker argues (and as I have argued in other articles), the notion of violence as vehicle for salvation depends on the logic of certain versions of atonement theology in which Jesus’ violent death on the cross is understood as salvific. The idea that waterboarding might deliver the victim from his or her sins also echoes the discourse used to justify contemporary practices of torture and the prevalent understanding of the so-called war on terror—on both sides—as a cosmic battle between Christianity and Islam.

But the Christian roots of waterboarding and salvific violence only help explain a part of Case’s alleged torture of Stallworth in her own home. At a recent American Academy of Religion conference I presented a paper on a panel called “Christians and Torture, from Golgotha to Abu Ghraib: Victims, Voyeurs, and Perpetrators.” Three of the other scholars gave papers on the torture of women accused as heretics or witches, many of whom were drowned. So, although The Smoking Gun tagged the Case article as “bizarre,” history suggests otherwise: trying to drown women is not unusual at all.

And, as is often the case, this waterboarding incident isn’t the first time Case abused his girlfriend; he’s already been convicted at least once of domestic assault against Stallworth.

Women stay in abusive relationships for a variety of reasons—financial need, loyalty, a desire to rescue their abusive partners, denial, love, shame, the belief that “this is just the way men are,” fear about their own and their childrens’ safety if they leave—a realistic fear given the fact that statistically women are most at risk of being killed when they leave their partners. Women also stay in response to pressure from their religious institutions. Some clergy are trained to “save the family” rather than to stop violence. Sometimes women stay because their minister tells them to. In some religious traditions, divorce is a sin. Obey thy husband.

Religious misogyny implicitly sanctions violence against women. Tertullian defined women as the devil’s gateway, Augustine insisted women were not made in the image of God, Aquinas classified women as misbegotten males, and Luther argued God created Adam to lord over all living creatures until Eve ruined it all. Just this summer, the Vatican issued a statement arguing that ordaining women as priests was as grave an offense as pedophilia. Why should anyone be surprised, then, that in comments responding to the The Smoking Gun article, one user called “rahimali” wrote, “I’m ok with a little waterboarding now and again if it shuts the wife’s cakehole. Maybe waterboarding would cure PMS?”

Although the torture captured on film at the Abu Ghraib prison in Iraq was presented as aberrant (the behavior of “a few bad apples”), released memos have shown again and again that torture and so-called enhanced interrogation remain part of US policy—sanctioned, supported, ordered, and rewarded. And although President Obama opposes torture and pledged to close it, the Guantánamo Bay Detention Camp remains open and, as the ACLU reports, the U.S. continues to transfer foreign nationals suspected of involvement in terrorism to detention and interrogation in countries where—in the CIA’s view—federal and international legal safeguards do not apply; in other words, to countries that torture. The U.S. has long been engaged in torture: from the genocide of native peoples, to the lynching of African Americans, to the School of the Americas, to the Tuskegee Institute to the treatment of prisoners in US prisons. And, as this most recent case shows, U.S. torture culture is not limited to prison cells—it reaches into our living rooms.

Case has been charged with domestic assault, false imprisonment and making terroristic threats. Meanwhile, the architects of the Torture Memos and proponents of waterboarding remain free—giving talks at universities, speaking on television shows, receiving medals of commendation, or sitting behind home plate next to Nolan Ryan cheering for the Rangers during the World Series.

Case is in jail for allegedly using the same technique employed by the U.S. military, the CIA, private contractors, and U.S. allies. In a country in which Karl Rove can say that he is “proud” of using waterboarding against suspected terrorists without facing punishment of any kind, why wouldn’t Case feel proud, too?

Reprinted with permission from Religion Dispatches. You can sign up for their free daily newsletter here.

Sarah Sentilles is a writer, critical theorist, and scholar of religion. She is the author of several books, including the memoir Breaking Up with God: A Love Story. Her next book, Draw Your Weapons, will be published by Random House in 2017.

It’s Time to End Discrimination in Crash Testing
Everything You Need to Know About Birth Control (Even Things Your *Doctor* Might Not Know)
Rest in Power: Urvashi Vaid, the Queer Movement’s Legendary Firebrand