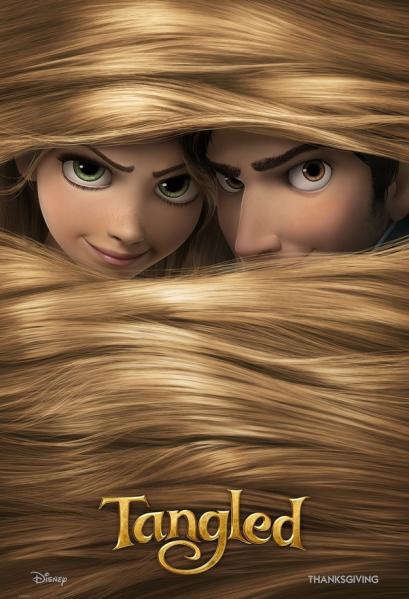 The good news is that Disney’s new animated feature Tangled is funny, fast-paced and visually stunning. The bad news is that it re-hashes the same old story: As a woman, you can either be a princess awaiting her prince or an evil stepmother/witch; as a man, you get all the action (in many senses of the word). And beauty, of course, equals white, blonde, thin and young.

Keeping in mind Disney’s recent announcement that after Tangled they won’t be making any more princess films, one can see Tangled as a transitional movie, an indication of where Disney’s future is headed. And as Margot Magowan notes, Disney putting the kibosh on princesses could have been a good sign: “Great! No more damsels in distress who end the movie by landing a man.” Alas, as Magowan and others report, Disney’s stated goal isn’t ending the helpless-princess theme; instead, it’s making sure the movies have big enough audience appeal (read: appeal to boys and men, not just girls and women).

To this end, Disney brought in a new directorial team in 2008 to overhaul the planned Rapunzel and “wring the pink out of it,” as the Los Angeles Times aptly put it. The resultant Tangled, with a non-heroine title, more action and a platoon of mega-muscular-man characters (in contrast to only two key females–Rapunzel and the evil Mother Gothel), bodes ill for Disney’s post-princess era.

While one blogger has called this a “gender neutral makeover,” it seems to me more of a masculinist makeover. The privileging of men in the story is apparent from the first image in Tangled, a zoom-in on a wanted poster of the male lead, Flynn Rider, as he narrates, “This is a very fun story and the truth is, it isn’t even mine.” The “fun” story involves the kidnapping and imprisonment of Rapunzel. Even though Flynn claims the story “isn’t even mine,” the story becomes very much about him and less about Rapunzel.

As noted by the film’s producer during production, “We’re having a lot of fun pairing Flynn, who’s seen it all, with Rapunzel, who’s been locked away in a tower for 18 years.” Ah, pairing a man of the world who has “seen it all” with a woman who knows nothing as she has been “locked away”–how egalitarian and gender neutral!

In addition to Flynn, Rapunzel has the requisite animal sidekick: a male chameleon named Pascal. And, once she escapes out into the real world, she encounters a plethora of other males–the horse Maximus (how’s that for a testosterone-fueled name?), the thugs that serve as Flynn’s former thieving buddies and the many light-hearted ruffians from The Snuggly Duckling pub. Additionally, Rapunzel’s father, the King, takes the spotlight in a few scenes meant to emphasize how much he and the Queen still miss their daughter. In these scenes, his hulking, bearded figure dominates the screen, his face torn with sadness, while his diminutive wife stands below and beside him as comforting helpmate.

As for Rapunzel, imprisoned within the tower since a child, she is a waiflike female with big eyes and a teeny-tiny waist who sings about doing chores with the refrain, “wonder when my life will begin.” Rapunzel is stereotypically overly emotional, swinging from one end of a mood swing to another as often as she (and others) swing from her long golden locks.

By films end, she has lost these magical locks after Flynn cuts them to save her life, and her remaining hair–no longer magical–turns brown (talk about latent color symbolism!). Her “happy ending” involves being returned to her real parents and marrying Flynn, who, the movie makes a point of emphasizing, proposes to her, not the other way around.

Admittedly, there are moments where Rapunzel is portrayed as brave and heroic, as when she tells Mother Gothel, “For every minute for the rest of my life I will fight,” or when she heals Flynn, saves them both from drowning and enables their escape from the Snuggly Duckling. She is an improvement on Snow White, who could only sing to animals and happily clean up after seven dwarves. Yet, as critic Scott Mendelson points out, her bravery is of a “condescending ‘girl-power’ punch or two” sort–it is the exception to her character rather than the rule. While Flynn is all masculine adventure, power and cunning, she is all long blonde locks with a hint of you-go-girl attitude to appease a 21st-century audience.

Since the media giant Disney makes these representations, they carry inordinate cultural weight. As Magowan writes, “because this boys club completely dominates kidworld, [Disney’s] privileging of males over females with no care at all, their disregard for half the population, is really sad.”

Obviously the (male) execs at Disney wanted to stay true to the fairytale roots, and thus kept Rapunzel white and blond, kept the evil witch character and kept the rescuing prince (though admittedly amping up his role). But even keeping to this narrow white- and male-privileged script, could they not have thrown in some female animals or patrons at the Snuggly Duckling?

And what possessed the filmmakers to have Flynn immediately call Rapunzel “Blondie”? Yes, it’s so funny when we identify women by their looks and body rather than bothering to learn or remember their names! (Not to mention the cultural associations with being called “Blondie,” such as the assumption one is dumb, “over-sexed” and good for no more than a pretty appearance).

Moreover, as Renee of Womanist Musings points out, the glorifying of blond hair, yet again, is problematic. She writes:

As a Black woman, I know all too well how complicated the issue of hair can be. Looking at the … image [of Tangled’s Rapunzel], I found that I could not see beyond her long blond hair and blue eyes. I believe that this will also become the focal point of many girls of color. The standard of long flowing blond hair as the epitome of femininity necessarily excludes and challenges the idea that [women of color] are feminine, desired … and therefore, while Disney is creating an image of Rapunzel that we are accustomed to, her rebirth in a modern day context is problematic because her body represents the celebration of White femininity.

The fact that Tangled is coming on the heels of the first African American [Disney] princess is indeed problematic. It makes Princess Tiana seem like an impotent token, with Rapunzel appearing to reset the standard of what princess means and even more precisely what womanhood means.

On the other hand, Mother Gothel, Rapunzel’s evil abductress, has dark hair and eyes and non-Caucasian features. According to Christian Blaulvelt of Entertainment Weekly, “Mother Gothel is a dark, dark character. I mean, she’s a baby snatcher.” Ah yes, and she is dark in more ways than one, her dark skin, hair and clothing contrasting with the golden whiteness of Rapunzel.

Alan Menken, the musical composer for the film, similarly notes that “Mother Gothel is a scary piece of work. Nothing she is doing is for the good of Rapunzel at all. It’s all for herself.”

Emphasizing her manipulative relationship with Rapunzel, Menken admits, “I was concerned when writing it. Like, will there be a rash of children trying to kill their parents after they’ve seen the movie?” Wow–how about worrying if there will be a rash of children who will see dark-skinned mothers (and non-wedded ones) as evil and sinister?

In addition to carrying on Disney’s tradition of problematic representations of race, the film also keeps with the tradition of framing females’ beauty obsession as evil and “creepy” (Flynn’s words) rather than as understandable in a world of Disneyfied feminine norms. A mirror worshipper to rival the evil queen in Snow White, Gothel is presented as a passive-aggressive nightmare–the tyrannical single mother so overbearing the Rapunzel must beg for the opportunity to leave the tower.

To sum up, we have a film dominated by male characters that focuses on the magical golden hair of a white princess who must be saved from an evil dark witch. Yes, it’s funny, with strong dialogue and good songs. Yes, it’s a feast for the eyes. Yes, I love the fact Rapunzel has more verve and spunk than her princess predecessors. But, leading into their commitment to stop producing princess films and create films that supposedly appeal to a broad demographic, Disney still has not cut its ties to a white, male-privileged view of the world. Not even close.

A longer version of this appears at Girl With Pen.