A Look Back at “The Feminine Mystique” - Ms. Magazine
Skip to content 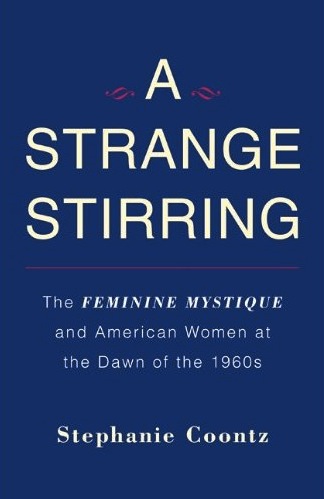 If you were to pick up The Feminine Mystique today, I suspect you’d wonder what all the fuss was about. Written in 1963, it was directed at college-educated, married white women who felt strangely unsatisfied with their lives for no good reason. They had achieved the American Dream–a husband, children, a comfortable home, enough money. All the trappings of a successful nuclear family.

But something wasn’t right for many of them, and author Betty Friedan identified it for them. It was “the problem with no name” that denied women the opportunities for realize their full human potential. Basically, women had been sold a bill of goods.

Almost 50 years later,social historian Stephanie Coontz has written A Strange Stirring: The Feminine Mystique and American Women at the Dawn of the 1960s, a sort of biography of Friedan’s groundbreaking book. Coontz describes the era in which it was written and explores its impact on women and men at the time. For women, Friedan’s book and an earlier article she wrote for Good Housekeeping, “Women Are People, too,” opened the floodgates. Hundreds wrote to her, many with the same sentiments: “I felt the article was written for me” or “I am one of the people you wrote about” or “Now I know I am not alone.”

Feminists in the 21st century, however, might find some parts of the book simplistic, elitist, homophobic and sexist. Some of Friedan’s attitudes are not only dated but odious. She denigrated housekeeping, imploring her readers to get careers and let others do the menial work, never thinking about the women who would do that work. She didn’t address the problems faced by working-class women who labored out of economic necessity and still took care of the home. She warned of “the homosexuality that is spreading like a murky smog over the American scene.” (But, in fairness, I remember being at the National Women’s Conference in Houston in 1977 when Friedan signaled a change of heart by seconding a lesbian rights resolution that everyone had assumed she’d oppose.)

While it’s true that she was elitist and initially homophobic, Friedan did speak to those women who were experiencing “the problem with no name” and afraid to ask the question, “Is this all?” Think of the angst felt by the women portrayed in Mad Men.

I have to confess that I hadn’t read The Feminine Mystique before I joined NOW in the early 1970s. I wasn’t going to be a housewife. The culture had changed, and the book no longer seemed relevant. But after joining NOW, I met many women who had been moved by the book. While Friedan didn’t expressly call for women to join organizations and demand their rights, she did shine a light on their personal darkness and let them see the oppression surrounding them. Her writing moved many to try to change their lives. Coontz says,

The Feminine Mystique electrified a layer of women ‘in between,’ women who might otherwise have been lost entirely, to themselves and to the women’s movement.

Those women who were swept into the Women’s Movement were forever changed by their involvement–as was American society. As an activist myself in NOW, I know how valuable their contributions were. They were smart, energetic, enthusiastic and put their talents to use to advance the cause of women’s equality. As we talked in our “rap sessions” and planned demonstrations and rallies, we of a later generation changed, too. Women with college educations got to know women with calloused hands. Women with children and nannies formed friendships with lesbians. Divorced women marched alongside single women. African American women demonstrated with former nuns.