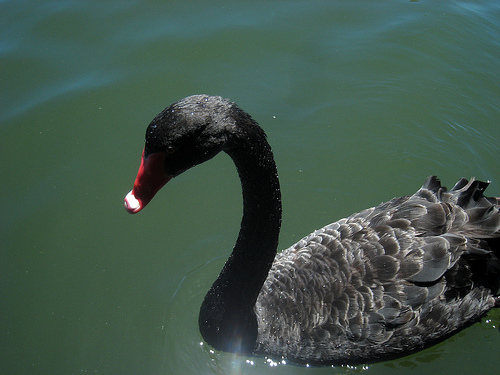 [Spoilers included.] There is a painful scene in the critically acclaimed 2009 movie Precious: Based on the Novel Push by Sapphire, which shows our titular heroine (played by Oscar-nominated Gabourey Sidibe) gazing into a mirror and imagining a slender white girl gazing back at her. In the mind of Precious, a 16-year-old poor, black, obese survivor of abuse, she longs to be someone who is her polar opposite–a figure who is beloved and far removed from the sexual abuse that she suffers.

So imagine, then, watching a more recently acclaimed film–Darren Aronofsky’s Black Swan, starring Golden Globe winner Natalie Portman–and finding yet another young woman, Nina Sayers, horrified by her own image. Unlike the obese and impoverished Precious Jones, though, Nina is the epitome of beauty and white femininity: an anorexic-thin ballerina, whose chance to shine in the spotlight is nonetheless threatened by darker forces.

Despite their obvious racial, class, physical, and geographic differences (Precious resides in Harlem; Nina lives on the Upper West Side), both women dwell in gloomy apartments heavy with the air of maternal oppression. These heroines could actually be each other’s double–a theme dramatically explored  in Black Swan. See, both Precious and Nina suffer from mother-daughter sex abuse, a topic that few have discussed publicly even though both films received widespread attention when they opened in theaters. How much of our reluctance has to do not only with the subject matter but also with how each film chooses to tell their stories? How do these stories, and our own responses to them, reflect racial constructions around motherhood and family dysfunction?

When Precious opened last year to critical acclaim and big box office, the main debates surrounding the film concerned the demonization of Precious’s mother Mary (played by Oscar-winning Mo’Nique). Black audiences were quick to point out that Mary was a stereotypical distortion of black motherhood, while others chose to view the story through a sociological lens. We could point to the family’s impoverished conditions as the cause for its dysfunction, as well as to the sexist treatment both Precious and Mary received from the absentee father, who took off from the household after twice impregnating Precious and giving her HIV, thus sparking Mary’s envy and resentment toward her own daughter. This is the pathological black family writ large.

But poverty is just part of the problem, as we witness a similar dysfunctional family in Black Swan, in which Nina and her mother Erica (played by Barbara Hershey) live in a relatively spacious and middle-class apartment in New York City. In this story, there is no mention of the absentee father, which might suggest that single-mother-headed households are viewed as deviant across racial and class lines.  However, black dysfunction is often reduced to sociology, while white dysfunction is reduced to psychology.  It’s not surprising that most conversations about Black Swan focus on how “crazy” and “psychotic” Nina became towards the movie’s end, while few have named the source for her mental decline. In other words, few recognize Nina as a victim of incest, the way we immediately recognize Precious’s victimization.

Granted, it’s rather difficult to not talk about Mary as a sexual predator when director Lee Daniels left little to the imagination (depicting Mary in bed pleasuring herself before calling for Precious to “come take care of Mama”), while Aronofsky overwhelmed Black Swan with surrealism, Swan Lake allegories and ambiguous shots. As a result, the abuse that Nina suffers can only be hinted at (such as depicting Erica calling out to her daughter, “Sweetie, are you ready for me?,” right after we witness Nina exploring ways to keep her mother out of her room).  Even here, the racial differences in the heroines are highlighted. Precious is expected to serve as the sexual aggressor while Nina is expected to be passive as she awaits her mother in bed.

Moreover, there is a certain ease in blatantly depicting a black mother as monstrous and depraved, while the pathology of the white mother, whose interaction with her daughter is one of suffocating love rather than outright hatred, can only be suggestive and viewed as “creepy” (as in, she is definitely “not the norm,” even if Aronofsky invokes ethnic stereotypes of “pushy Jewish mothers”).

Even more telling in the conversations we are having about Black Swan is the fetishistic treatment of white women’s bodies, which distracts us from some of the deeper themes explored. For instance, the infamous lesbian sex scene, which had audiences buzzing even before the movie debuted, is a cover for the sex abuse Nina experiences. It’s important to note that, after this scene (which is later revealed to be an Ecstasy-induced fantasy), Nina’s attitude towards her mother changes from fear and resentment to outright disgust,  leaving us to question if she had been having sex not with Lily (played by Mila Kunis)–another dancer whom she views as a rival–but with her own mother. It is this disgust that leads to her mental deterioration, her rage (which I interpret as a “healthy” response to abuse) and her eventual embrace of the passionate and sensuous Black Swan role that she must master in her debut performance as the Swan Queen.

Because Nina’s abuse remains an unspoken and haunting presence in the film, she cannot find healing. And this is where the narratives in Precious and Black Swan diverge.  Even as they tell similar stories of how some daughters suffer unspeakable abuse at the hands of their mothers, we tend to romanticize the story of the black survivor and the white victim. If Precious can find salvation and liberation in an alternative school, where she learns to write and encounters self-empowered women such as her teacher and other students like herself, Nina’s education leads to the exact opposite: She can only find self-destruction in art, similarly abusive authority figures (such as her ballet instructor) and female rivalry versus feminist support and friendship. Lily comes closest to being a friend, except Nina’s paranoid fantasies, which confuse Lily with her mother, turn her into a threat.

While I realize Aronofsky would rather eschew feminist liberation for his nihilistic fixation on death and madness (a recurring theme throughout his movies), I prefer my own imagined alternate ending for Nina. In my story, she survives her deep wounds, seeks psychiatric treatment and eventually joins a New York City survivors group.  There, she might encounter a Precious–both women automatically dismissing each other at first as being too different from themselves. Then they share their stories and realize how easily they could be each other’s double.