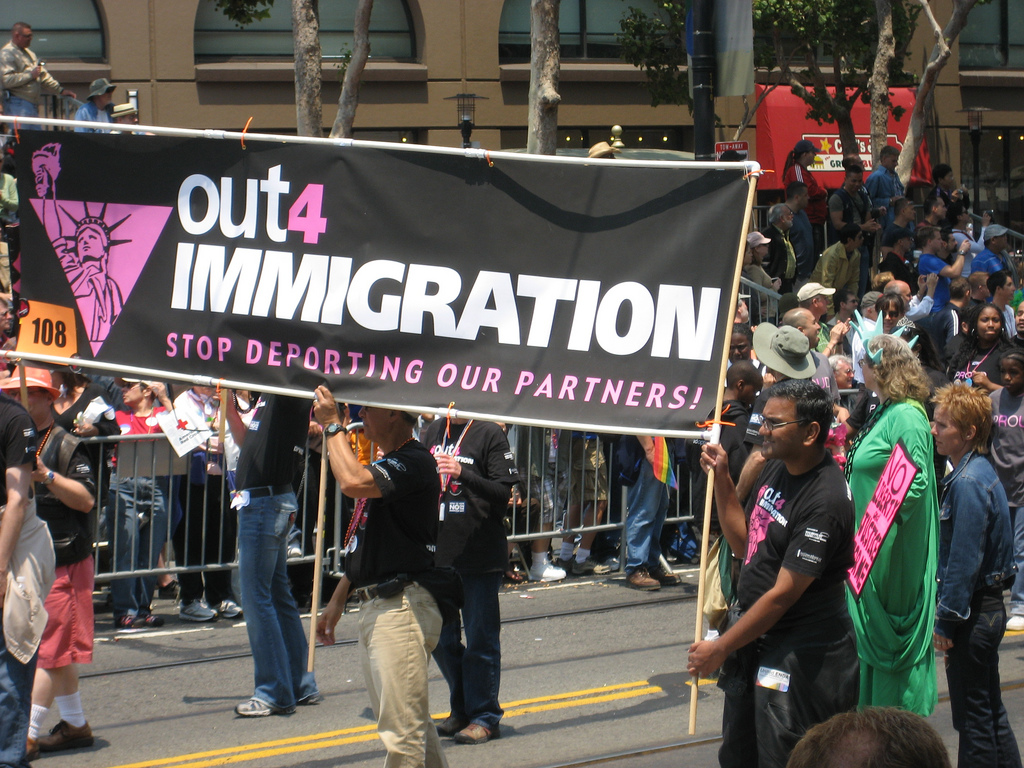 On January 28, just two days after the brutal murder of Ugandan gay rights activist David Kato, the United Kingdom’s high court granted another Ugandan, lesbian asylum seeker Brenda Namigadde, a temporary reprieve from deportation. Namigadde’s initial application for asylum was rejected because she is not “lesbian enough.” Her appeal is scheduled for Friday.

According to Political Scrapbook, the judge found it “strange” that Namigadde didn’t read lesbian magazines and books or consume other gay media. Namigadde is up against a major obstacle for lesbian and gay asylum seekers as a recent article by New York Times writer Dan Bilefsky reports: LGBT asylum seekers have to “perform” their sexuality in order to convince immigration authorities that their claims are legitimate. Human Rights First lawyer Lori Adams told Bilefsky:

An applicant’s homosexuality must be socially visible. The rationale is that if you don’t look obviously gay, you can go home and hide your sexuality and don’t need to be worried about being persecuted.

Even if sending asylum seekers home to hide in shame were ethical, hiding wouldn’t be easy for Namigadde. Her case has attracted international media attention that has placed her on the radar of David Bahati, the MP who introduced Uganda’s notorious Anti-Homosexuality Bill in 2009. Bahati spoke to Melanie Nathan after she wrote about Namigadde’s case at LezGetReal. He told Nathan that Namigadde would be welcome in Uganda if she repents for and renounces her sexuality; her failure to do so will land her in prison.

“It is a great irony that in order to survive Brenda is expected to still prove in the UK that she is a lesbian and at the same to disprove that she is not a lesbian in Uganda,” Nathan said. That incongruous burden of proof is further complicated by the culture of disbelief that all women asylum seekers face. Women asylum seekers tend to present far more complex cases than men do, including rape trauma, domestic violence, “honor” crimes, sex trafficking and political persecution. A recent report by Asylum AID reveals that far too many women’s cases are being refused based on arbitrary grounds, and claims for lesbians are being routinely dismissed. Paul Canning’s coverage of the report for LGBT Asylum News details the UK Border Agency’s (UKBA) discriminatory approaches to claims made by lesbians. Canning recounts that an interviewer asked one lesbian asylum-seeking woman if she could explain “the nature of a sexual relationship between two women.” UKBA interviewers are instructed to ask probing questions while remaining aware of the sensitive nature of gender and sexuality-based claims, yet border agents continue to exhibit insensitivity toward women, many of whom have endured rape and torture.

Lesbian asylum seekers fleeing persecution because of their sexuality often repress or are unable to disclose details about their sexual pasts because of trauma and shame. Says Cary Alan Johnson, executive director of the International Gay and Lesbian Human Rights Commission (IGLHRC):

People are traumatized and sometimes can’t talk about what they went through back home. They may also not be ready to immerse themselves in LGBT communities in countries where they are seeking asylum.

Sexuality-based asylum cases entail other nuances as well. Some lesbian asylum seekers have been married to men and may have even had children with those men. Sometimes those marriages are forced, Selly Thiam, founder and executive producer of None on Record: Stories of Queer Africa, told me in an interview. Patriarchal cultures in the West and in African communities compound the social invisibility of African lesbians as well as bisexual and transgender people, according to Thiam.

Due to the intricate nature of LGBT asylum cases, Stonewall and UK Lesbian and Immigration requested that sexuality-based claims be removed from the “detained fast track” system, an accelerated process in which asylum seekers remain in detention while their claims are examined and decided within a few days to two weeks. The fast track system was designed to handle simple claims. Human Rights Watch (HRW) reports that for women whose claims involve issues related to sexual violence and gender-based persecution, lawyers or solicitors have little time to establish trust with their clients or to gather the evidence needed to substantiate their claims. Women’s rights researcher for HRW, Gauri van Gulik, says the fast track system “doesn’t meet even the basic standards of fairness” for handling complicated claims.

Under that system, Brenda Namigadde’s legal team has had less than a week to gather enough evidence for her appeal. “She hasn’t had a fair chance.  We have been able to find some evidence that she is a lesbian, but she’s in a legal system that is totally stacked against her,” Paul Canning lamented in our Skype conversation. As the international LGBT community continues to mourn the loss of David Kato, Namigadde’s fate and safety still hang in the balance. The need to reform the asylum system to meet the needs of LGBT claims is dire, but, as Cary Alan Johnson emphasized, so is the need to “protect the right for LGBT people to be queer right where they are.”