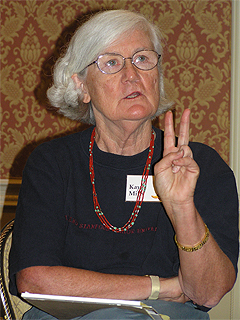 For many journalism historians like myself, Kay Mills’ first book, A Place in the News: From the Women’s Pages to the Front Pages, modeled how to, finally, write women into the story of journalism. And she did it in a way that translated so well–she began each chapter with a personal story about discrimination endured by a female journalist, starting with her own story of Newsweek’s Chicago bureau chief declining to hire her in 1966. She recalled him saying,

I need someone I can send anywhere, like to riots. And besides, what would you do if someone you were covering ducked into the men’s room?

Mills died a few weeks ago of a heart attack, at age 69, evoking an outpouring of shock and sadness. She had touched a large audience in her lifetime–as a writer, as a mentor, as a journalism hero.

Born in Washington, D.C., and studying at Pennsylvania State University and Northwestern University, she began her journalism career at United Press International. She then moved on to the Baltimore Evening Sun and eventually joined The Los Angeles Times as an editorial writer in 1978–one of the first women in this position–and later became assistant editor of its Sunday Opinion section. In 1991, she left the Times to write books that told the story of forgotten women and minorities. As she told The New York Times about A Place in the News:

I was trying to sort out why this profession I cared so much about really didn’t return the favor for women–and I might add, minorities–for such a long time.

She wrote four other great books, all about social issues, civil rights and women’s rights–This Little Light of Mine: The Life of Fannie Lou Hamer; Something Better for My Children: How Head Start Has Changed the Lives of Millions of Children; From Pocahontas to Power Suits: Everything You Need to Know About Women’s History in America; and Changing Channels: The Civil Rights Case that Transformed Television. Yet her biggest legacy for women is perhaps her role as founding board member of JAWS (Journalism and Women Symposium) in 1985. The group, which pairs established journalists with newer reporters, continues to meet annually and is a powerful mentorship program.

Kay Mills was remembered at an East Coast memorial yesterday; a West Coast memorial will take place at the end of the month. She would  likely want us to remember not just her, but that, based on a 2010 survey, women make up only about 34 percent of newsroom supervisors– a number virtually unchanged since 1999.

Kay Mills did her part to get us where we are today, but she also believed we still have a ways to go. I’m among the women who’ve benefited from the trails Mills and her counterparts blazed. With her loss, it’s up to me and the women of my generation–and the generations that follow us–to work to preserve and honor Mills’ legacy of fighting for equality and recognizing those who did so much of the hard work in the past.