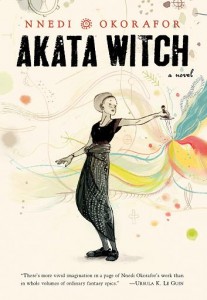 A review of Akata Witch by Nnedi Okorafor

Young-adult fiction is influential; women and men often act out stories they read as teens. But try finding feminism in popular fantasies such as Stephenie Meyers’ Twilight, or communities of color in Rowling’s bestselling Harry Potter series. Nnedi Okorafor’s books are a welcome contrast. The author of several award-winning fantasies for young people and an acclaimed novel about rape, Okorafor writes strong heroines making magical journeys of discovery through culturally diverse landscapes.

“This world is bigger than you,” the adults in Sunny Nwazue’s life keep telling her. Sunny, 12-year-old heroine of Okorafor’s latest young adult novel, Akata Witch, lives in a world very much like our own: intricate, vital, busy and in no way limited by national borders. Born in the U.S. of Nigerian parents (like her creator), Sunny returns with her family to Africa at the age of 9 to happily eat roaring hot pepper soup with Igbo, Efik and the many other ethnic groups who call their town of Aba home. But she faces discrimination as an albino and an akata, or “foreign-born” black, and boys refuse to take her soccer playing seriously. Then Sunny’s dawning adolescence awakens her latent magical abilities, and she’s more different than ever. She can turn invisible. She can see the future.

Now Sunny must navigate her way not just among Nigeria’s many ethnicities but between the pan-tribal practitioners of juju (a West African term for magic) who are known as the Leopard People, and the Lambs— this book’s counterpart to the non-magical Muggles of Harry Potter fame. Leopard People inhabit all nations under a multitude of different names, forming secret societies in Asia, Africa, Europe, North and South America—everywhere.

Naturally, Sunny’s parents are Lambs. They’re ignorant of their daughter’s juju initiation, a grittily literal journey to the center of the Earth, and of her further magical adventures, and she has to keep them that way—even when Sunny’s disregard for juju’s rules gets her spirited away for punishment to the secret neighborhood of Leopard Knocks His Foot. Even when she and her fellow apprentices are given the task of stopping a serial killer who targets children.

As they make their constant pronouncements about the world’s immensity, adults tell Sunny that it will go on without her. Feisty Sunny protests her teachers’ callous attitude, though the idea reassures as much as it horrifies her. She faces down the serial killer with a smile, knowing that she will die someday but the world will continue and that its end, which she has magically foreseen, can become a new beginning.

As the readership for young-adult fantasy widens and deepens, attracting adults of all ages, more of us will be looking for books by authors whose imaginations surpass the restrictions of the past: sexism, colonialism and the rest. And we’ll find them. Akata Witch is a spectacular tale of a young woman coming to power in a truly global environment. Sunny’s adventures give her a context for her special abilities and a gloriously huge arena in which to work her innate magic: the wide, wide world.

Nisi Shawl is the author of Filter House and a winner of the 2008 James Tiptree, Jr., Award; she will be the 2011 Guest of Honor for WisCon, the annual feminist science fiction convention.

Nisi Shawl is the author of Filter House and a winner of the 2008 James Tiptree, Jr., Award; she will be the 2011 Guest of Honor for WisCon, the annual feminist science fiction convention.