Victim of Terrorism Fights Back With Oscar-Nominated Documentary - Ms. Magazine
Skip to content 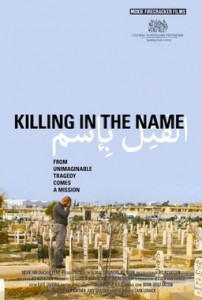 The Oscars–the red carpet, the stars, the gowns, the hair, the speeches, the tears … and the women who have made amazing films that are up for honors. The Best Documentary Short category was particularly fertile ground for women this year, with four of the five nominees directed by women. The fifth, Killing in the Name, is no less woman-driven: It was executive produced by Carie Lemack, cofounder of Global Survivors Network (GSN), a global organization for victims of terror “to speak truth to terror.”

On September 11, 2001, Lemack became an indirect victim of terrorism when American Airlines Flight 11 crashed into the World Trade Center; her mother, Judy Larocque, was on the plane. At the first ever United Nations Symposium on Supporting Victims of Terrorism [PDF] in September 2008, she met Ashraf al-Khaled, who lost his father, in-laws and dozens of friends when an Al Qaeda suicide bomber attacked his wedding party in Jordan on November 9, 2005. The seed for Global Survivors Network was planted there, and a film highlighting the experiences of those directly and indirectly affected by acts of terror was one way to carry the message forward.

“More than 88,000 people have been killed by terrorists in the past five years, but the voices of their families are rarely heard,” says Lemack. “[But] terrorists have access to the media and release their videos.” Lemack wanted to produce a film that would show how terrorist acts put families, neighbors, communities and religious centers at risk.

The resulting film follows al-Khaled’s anti-terrorism activism as he shines a light on the true cost of terrorism and attempts to foster debate within the Muslim community about religious zealotry and radical ideology. His work is rooted in a belief that “speaking truth to terror” just may change people’s minds. Says Lemack, “We can’t bomb our way out of the problem. We have to talk, to show the human side.”

Lemack has been traveling around the world screening the film, getting positive feedback along the way. A recent audience of 13- to 15-year-old schoolgirls in Jordan reacted angrily at the unnecessary loss of life in shown in the film. “No innocent people should be killed,” one said. Her classmates agreed.

Even if Lemack doesn’t take home Oscar, she’s making a difference that will last longer than the memory of who wins.

Image from the Internet Movie Database.