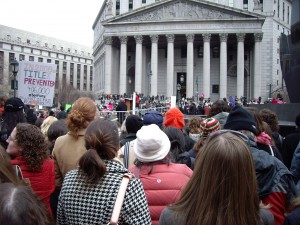 Feminists gathered in 55 cities worldwide on Saturday in a “Walk for Choice,” spurred by a recent wave of anti-abortion legislation in the U.S. Congress that detractors have dubbed “the War on Women.”

In New York City, thousands convened in front of the U.S. courthouse. Pro-choice senators, congresswomen, doctors and activists spoke out against the House’s passage of a budget bill that could eliminate funding for Planned Parenthood and other women’s health care providers.

“To Congress, I say, ‘Go back to Indiana with your values and keep them there!'” declared public advocate Bill de Blasio, referencing U.S. Rep. Mike Pence, (R-Ind.) a long-time anti-abortion advocate and the primary supporter of the current legislation to defund Planned Parenthood. 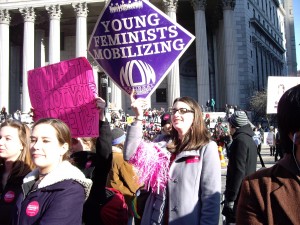 nding for Planned Parenthood Federation of America, one of the largest women’s health care providers in the U.S., serving 1.85 million low-income women each year. Currently, federal funding for PPFA does not go to abortions, but can be used to provide other forms of health care, including birth control, pap smears, STI testing and cervical cancer screening. The bill would also eliminate funding for Title X programs, which provide birth control and family planning support to millions of low-income women across the country.

Elected officials and pro-choice advocates on Saturday deplored the legislation and the Republican assault on reproductive rights.

“There’s no question the new Republican leadership has just shown they have no concern for women’s health care,” said Eleanor Smeal, president of the Feminist Majority Foundation.

“Republicans care about fetuses, until they become women,” said Dr. Sarah Miller, a women’s health practitioner in the city.

“You can’t have a culture of life if you don’t value the women that give that life,” she said, “but what Congress doesn’t understand is that pregnant women invented political defiance.” 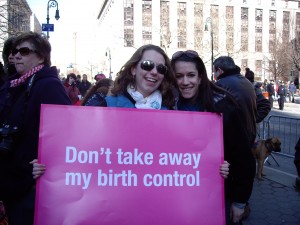 That spirit was certainly on show on Saturday, with the thousands of Planned Parenthood supporters carrying signs reading, “Stop the War on Women,” “Keep Boehner away from my uterus,” “I was a choice,” “Funding abortions is fiscally responsible” and “Real men support women’s health.” (See more here.)

Other liberal causes piggybacked on the pro-choice agenda: Advocates for unions, gay marriage and environmentalism waved signs as well, welcomed under the big tent of feminism. As one protester said, “The uterus is an expandable organ–inside it fits the entire U.S.”

If you missed the rally, you can still be involved by signing this open letter to Congress.

Photos courtesy of the author.