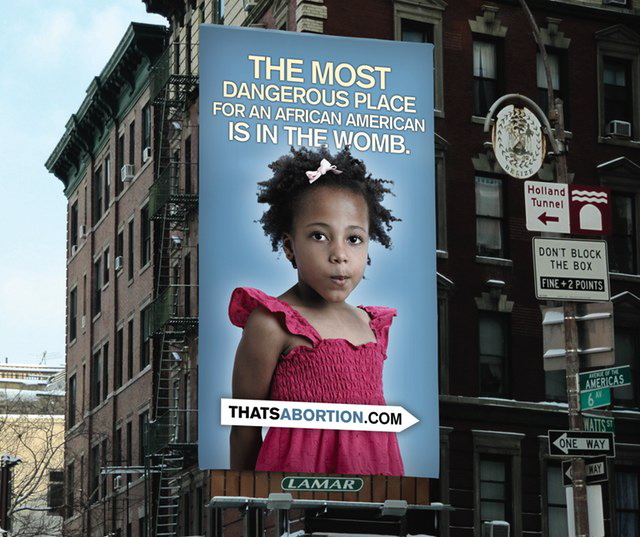 Last weekend, my friend told me that her 15-year-old student is pregnant. My friend works at a low-performing Philadelphia high school in a poverty-ridden, predominantly African American and Latino community. This particular student had been accepted into some of the most competitive high schools in the city, but remained in her neighborhood school in deference to her mother’s fear of the potentially dangerous commute. My friend, just 23, has already been to the hospital once this school year for the birth of another student’s child–she was left speechless when asked to be the godmother.

Little did we know that the day that my friend and I discussed her student’s unenviable position was the very day the anti-choice group Life Always took to the streets of New York to broadcast their fear-mongering message. The billboard they put up (now removed) read, “The most dangerous place for an African American is in the womb.” The organization’s intention is to coax Americans into believing a woman’s right to chose is a genocidal plot. SisterSong Women of Color Reproductive Health Collective makes short work of that argument:

Black women are not the pawns of these white people who erect such billboards. We find them offensive, racist, sexist and–most of all–disrespectful of our decision making, our 400-year history of raising and caring for black children and our human right to make health care choices for ourselves.

While Life Always claims to be concerned about “unborn” people of color, from a look at their website the conservative group does not seem too invested in black life here on Earth. I am skeptical of any organization that claims to care about “the black community” but pays no attention to institutionalized poverty, lack of access to effective health care and a cycle of oppression that remands poor people of color to places where living a life with adequate resources is all but unachievable.

This particular billboard was nipped in the bud by the activism of reproductive rights advocates around the country, such as SisterSong. And perhaps I am overly optimistic, but I do not believe incendiary billboards, 29 feet high and 16 feet wide, will overturn the now 38-year-old decision of Roe v. Wade. Of more concern is an aggressive House Republican effort to cut federal funding for reproductive health care facilities such as Planned Parenthood.

However, if this billboard–similar to campaigns launched by The Radiance Foundation, directly targeted at people of color–has shown us anything, it is that we must begin an honest discussion in feminist, humanist and progressive communities about how we are going to diversify the voices in the abortion-rights movement. It was disheartening to see images of Foley Square, the site of a rally held to protest the House measure on Planned Parenthood funding on Saturday in New York, with such a homogenous group of white women on the front lines.

As conservatives continue to finance black fringe organizations to promote a politics of hate that contributes to an intensified scrutiny of the black female body, we must be ready. Feminists of all backgrounds have to be honest about where they come from in advocating for abortion rights. As a person who will soon receive a college degree, I recognize I am in a position of extreme privilege to have a platform to discuss abortion in an academic, theoretical framework. Although I am a working-class woman of color, my education has afforded me access. While I care deeply about this issue, I have never needed to utilize abortion services and no one at my high school had a child.

I would encourage all feminists and those who consider themselves allies in the pro-choice struggle to be equally honest about their privilege. All feminists should work to provide women of color in underserved communities the resources to tell their reproductive stories, as SisterSong is already doing.

Many of my friend’s students, including the aforementioned 15-year-old, do not even entertain the idea of abortion. In their community, terminating a pregnancy is associated with tremendous amounts of shame and dishonor. Billboards like the one erected by Life Always buttress that message of indignity. To defuse it, as feminists continue to fight for the necessary services of Planned Parenthood, we must ensure that women of color, the silent majority in this debate, are passed the mic.

Eva McKend is a graduate student at the S.I. Newhouse School of Public Communications at Syracuse University where she is pursuing her degree in Broadcast and Digital Journalism. A multimedia storyteller, she enjoys using her skills of writing, videography and film editing to tell stories that would otherwise go untold. In 2011, she graduated from Swarthmore College, where she founded A Campaign for Me to address black female representation in the media. Eva is a former Ms. intern.