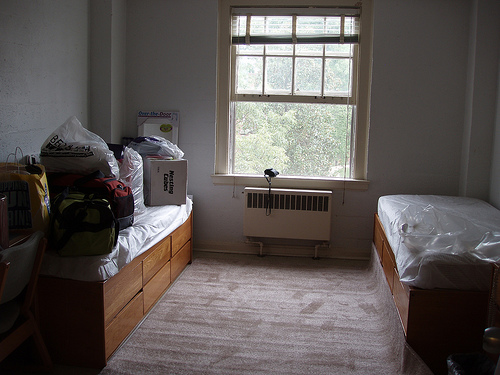 This fall, Rutgers University will join a small number of colleges in the U.S. that allow mixed-gender dorms. Some attribute Rutger’s decision to the recent suicide of Tyler Clementi, a freshman who was harassed after his roommate videotaped him having sex with a man, but Rutgers staff say it’s to better serve their lesbian, gay and transgender students who might not be comfortable or fit in with traditional gendered housing. One Rutgers student told Star-Ledger staff:

I’m really glad they did it, although I wish it wouldn’t have taken as long. We live in a world where in order to be considered a human being you have to be male or female, and not everyone fits into that kind of binary. It’s important to have spaces where people don’t necessarily have to worry.

The Genderblind Campaign lists several reasons why coed housing makes sense. This is my favorite:

It is now apparent that same-sex housing policies were, and continue to be, based on traditionalist, heteronormative assumptions about sexuality.

Gender-blind housing makes sense for LGBTQI students who might be bullied or harassed if assigned to traditional male or female dorms. It also makes sense for heterosexual people, too: Are we not passed the era when we thought a man and a woman alone together would assuredly have sex? Some online commentors are most focused on how now heterosexual couples will be able to “shack up,” even Gawker: “Meaning, yes, boys and girls can live together in dry hump heaven.”

Yeah, because college students definitely would not have sex otherwise.

The University of Idaho recently reversed a decision to allow gender-neutral housing after pressure from the Idaho Values Alliance. The Illinois Family Institute talks about why they find gender-neutral policies terrifying:

These changes facilitate the deracination of a proper and true understanding of sex differences and sex roles and constitute yet one more step in the slow, cultural death march that threatens the psychological, physical, moral, and spiritual health of our children and the health of society-a march that must be opposed.

Gee, won’t somebody think of the children?

For people with worries about possible increased risk of sexual assault, it’s important to note that schools with gender-neutral housing still offer traditional dorms as well. Rutgers, for example, only has 100 spots for the gender-neutral dorm pilot program, and the co-ed bathrooms will have extra privacy measures like key-card entry and shower doors, instead of curtains.

I’m a cisgendered heterosexual woman, and except for a brief stint when I crashed in my little brother’s dorm room, I lived in traditional segregated housing during my first few semesters of college. I thought it was pretty silly then and I really do now.

Moving into a tiny space with a complete stranger is awkward no matter what, and I can’t imagine what that would feel like for, say, a gay man who has to live with a “bro,” or a transgender man not allowed to live in male housing. Hopefully more colleges will decide to join Rutgers, Columbia and Michigan and end old-school housing policies.