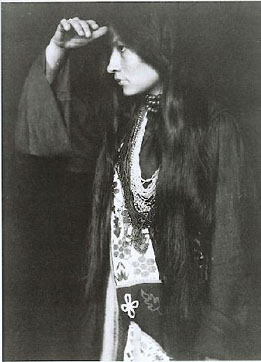 Forced to inhabit multiple worlds, Zitkala-Ša dedicated her life to art and activism, challenging authority and exposing corruption in a government that did not consider Native Americans worthy of raising their own children, preserving their own cultures, or accessing citizenship and legal rights.

Zitkala-Ša was born on the Pine Ridge Reservation in 1876. Like thousands of other Native American children in the late 19th and early 20th centuries, federal reservation officials sent her to the White’s Manual Labor Institute in Wabash, Indiana against her mother’s wishes. Just 8 years old and more than 1,000 miles from home, she was instructed in White’s rigorous “Americanization” program. Zitkala-Ša became Gertrude Simmons, and she was forced to speak English and observe Christianity or face harsh beatings. Later she wrote of her time at White’s:

Once I lost a dear classmate. I remember well how she used to mope along at my side, until one morning she could not raise her head from her pillow. At her deathbed I stood weeping, as the paleface woman sat near her moistening the dry lips. Among the folds of the bedclothes I saw the open pages of the white man’s Bible. The dying Indian girl talked disconnectedly of Jesus the Christ and the paleface who was cooling her swollen hands and feet. I grew bitter, and censured the woman for cruel neglect of our physical ills. I despised the pencils that moved automatically, and the one teaspoon which dealt out, from a large bottle, healing to a row of variously ailing Indian children. I blamed the hard-working, well-meaning, ignorant woman who was inculcating in our hearts her superstitious ideas.

Although she often challenged the white authority at the school, her visits home each summer were fraught with reminders that her years at White’s had stripped her of the ability to communicate effectively with her own family. She wrote:

My mother had never gone inside of a schoolhouse, and so she was not capable of comforting her daughter who could read and write. My mother was troubled by my unhappiness … Coming to my side, she offered me the only printed matter we had in our home. It was an Indian Bible, given her some years ago by a missionary. She tried to console me. “Here, my child, are the white man’s papers. Read a little from them,” she said most piously. I took it from her hand, for her sake; but my enraged spirit felt more like burning the book, which afforded me no help, and was a perfect delusion to my mother.

Unable to adjust to reservation life, the young girl returned to boarding school permanently in 1888. She entered Earlham College in 1895, where she studied music and published several essays in the school’s literary journal. One of those essays, which criticized the Christianity enforced in Native American boarding schools, won the Indiana State Oratorical Contest. As she accepted her prize at the state capital building, a group of young men in the audience unfurled a large white banner bearing one word: “Squaw.”

The indignities continued; unable to secure a teaching position after completing her studies at Earlham, she had no choice but to work for the Carlisle Indian Industrial School, the flagship of the Native American boarding school system. Carlisle was run by Richard Henry Pratt, a former Army officer who routinely exploited the students as domestic workers or artisans whose work was sold for profit under the guise of “industrial training”–while at the same time receiving government funds for each student. In 1900, Gertrude Simmons began publishing articles criticizing the white leadership at Carlisle under the name Zitkala-Ša.

As months passed over me, I slowly comprehended that the large army of white teachers in Indian schools had a larger missionary creed than I had suspected. It was one which included self-preservation quite as much as Indian education. When I saw an opium-eater holding a position as teacher of Indians, I did not understand what good was expected, until a Christian in power replied that this pumpkin-colored creature had a feeble mother to support . . . I find it hard to count that white man a teacher who tortured an ambitious Indian youth by frequently reminding the brave changeling that he was nothing but a “government pauper.”

Her identity was soon revealed, and she left Carlisle rather than support its policies any longer. Instead, she auditioned as a violinist for the New England Conservatory of Music and spent the next two years performing and studying music composition. As she traveled between concerts, she began compiling and translating Nakota oral histories. The first book, Old Indian Legends, was released in 1901. The following year, The Atlantic Monthly published her essay “Why I Am A Pagan,” a revolutionary piece during a time when mainstream publications were pressured to maintain the image of the boarding school system as necessary and beneficial.

She returned to her reservation at the end of the concert tour and met Raymond Bonnin, a Nakota translator for the Bureau of Indian Affairs. They were married in 1902 and moved to the Ute Reservation in Utah to work as advocates for Native American legal rights. In her years in Utah, she fought to allow Native Americans legal representation in land disputes, pressured the Bureau of Indian Affairs to employ more Native Americans, and spoke on the importance of preserving Native American history. She also collaborated with composer William Hanson on Sun Dance, an opera based on traditional Nakota songs. She wrote the libretto and played the music on her violin while Hanson transcribed and arranged the melodies as a full orchestra score. The opera premiered in New York with the New York Light Opera Guild several years later, and remains the only opera authored by a Native American.

In 1916, she was elected secretary of the Society of American Indians on the strength of her activism in Utah. She and her husband moved to Washington, D.C., where she edited American Indian Magazine. The magazine and proximity to government documents allowed her to investigate corruption within the Bureau of Indian Affairs. In a series of exposés, she recommended the bureau be dissolved completely to allow individual nations control over their own people and resources. Most significantly, she launched a formal campaign within the Society of American Indians to pressure the federal government to grant Native Americans full citizenship rights. Native Americans were not granted automatic birthright citizenship, but instead were allowed to petition for citizenship either by joining the armed forces or after formally renouncing their tribal ties. As a result, the vast majority of people on reservations were not United States citizens and had no citizenship rights.

At the end of her life, Bonnin turned her attention to the federal government and Army’s violent and exploitative methods of keeping order on reservations in Oklahoma’s Poor Rich Indians: An Orgy of Graft, Exploitation of the Five Civilized Tribes, and Legalized Robbery. The book reached Congress, which responded by giving Native Americans far greater financial and administrative power over their own land. Although the Bureau of Indian Affairs was not abolished in Bonnin’s lifetime, she was successful in pressuring President Herbert Hoover to appoint two Indian Rights Representatives of native descent in the bureau’s main office. She died in 1938 as President of the National Council of American Indians, a group she founded in 1926 to organize Native American issues under one lobbying power and to ensure smaller tribes’ needs were represented in Washington.

Photo of Zitkala-Sa from Wikimedia Commons.