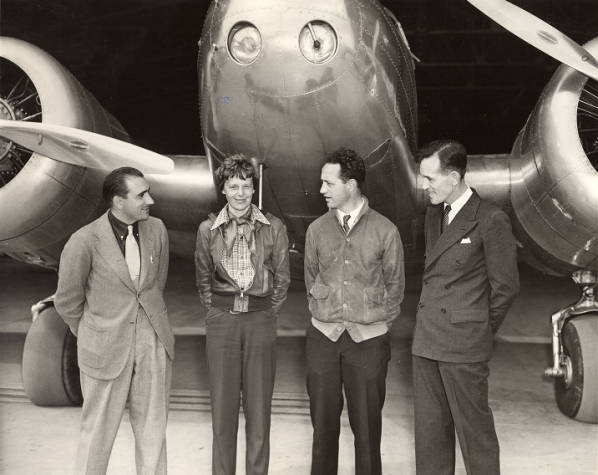 March 20, 1937: Amelia Earhart’s legendary skill as a pilot averted a potentially fatal disaster today in her unsuccessful attempt to fly to Howland Island. She immediately assured everyone that once her plane is repaired, she will be off again on her around-the-world flight.

She was barreling down the runway at Hawaii’s Luke Field at 7:30 this morning when, as she calmly put it later, “Something went wrong.”  Though the crash took place near the end of the long runway, far from those who witnessed it, there is speculation that the plane first began to sway under the sloshing of its heavy load of fuel, and then a tire blew out about the time Earhart hit a wet patch of grass. This convergence of events caused the plane to veer, and as a wing began to dip precariously, she adjusted the throttles to try to level the ship. For a second it looked as if she had succeeded.

But the swaying caused by the shifting fuel increased, and as the weight of the plane rested on a single landing gear, it gave way. A wing slashed into the ground, spinning the ship as it skidded along the runway. Only Earhart’s quick cutting of the ignition switches kept a fire from breaking out that would have been fed by 900 gallons of gasoline.

There was great praise for the pilot’s courage and skill among the Army officers who witnessed the attempted takeoff. “I never saw anyone with cooler nerve,” said General Barton Yount, commander of Hickham Field.

This was actually Earhart’s second near-disaster during the two flying days of the trip. Though she set a record for the fastest crossing from Oakland to Hawaii of 15 hours, 51-and-a- half minutes, it was discovered upon landing that the propeller bearings were almost dry. Had this not been discovered and this morning’s takeoff been successful, she might have been forced down at sea somewhere between Hawaii and Howland, about 1,600 miles away, and never heard from again.

Earhart’s “Flying Laboratory” is presently being dismantled and will be sent by ship back to the Lockheed factory in Burbank for repair. Wasting no time in the interim, she and her crew–Harry Manning, Paul Mantz and Fred Noonan–boarded the “Malolo” at 11:30 this morning and are now already at sea, heading back to California to plan her next attempt to be the first to circumnavigate the world via the Equatorial route. Said Earhart,

This action means postponement only. It is my full intention to go ahead with the adventure as soon as possible.

Photo of, left to right, Mantz, Earhart, Manning and Noonan in Oakland on March 17, 1937, from Wikimedia Commons, public domain.