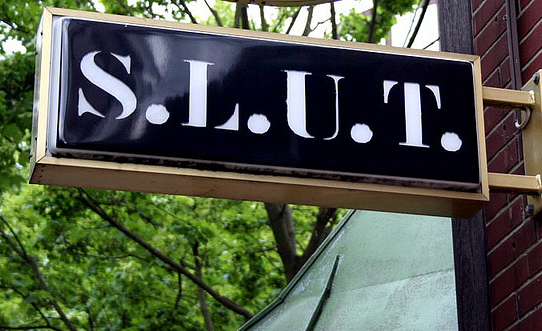 Many of these words are used as terms of endearment among certain clans of females, but others find them dreadfully offensive. The words’ meanings fluctuate based on by and to whom they are said. Still, the fact that these words have such a significant effect makes a point about the values of the next generation of young adults.

So, it appears that the worst things for a female young adult to be are overweight, sexually promiscuous and homosexual.

The only reason for someone to remark upon someone else’s weight, arguably, is for health reasons, and for that you would really have to care about him or her. Because of the stigma of obesity in our society, though, it’s almost impossible to make this statement without being utterly offensive. And even if it is for health reasons …  well, if you possessed an acquaintance who never ate any fruit or vegetables, would you yell down the hallway after she did something awful,“You lousy non-fruit eater!”?

The non-fruit eater, to eliminate association with this label, might increase her fruit intake, which could improve her health. Similarly, someone called “fat” might try to lose weight. With teenagers, often unaware of and impulsive about such issues, the seemingly easiest way to lose weight is to engage in an eating disorder. And it’s likely that anorexic or bulimic behaviors would be far more damaging to her health than being (over)weight would. The (coughcough bullshit coughcough) beauty standards shown everywhere–television, the Internet, magazines–already torture tons of girls about their self-image, causing many  to think that they are “fat” when they are at a perfectly healthy weight. And if they were overweight to the point where it negatively impacted their health, there shouldn’t be societal condemnation; there should be support. Weight certainly doesn’t impact who someone is as a person.

Now for slut, which according to Merriam-Webster is “a slovenly woman,” “a promiscuous woman; especially: prostitute” or “a saucy girl.” Many girls who are branded as sluts wear things that are more revealing and sexually provocative than do other girls, but is that slovenly? Today, the word slut does pertain to promiscuity, but when this term originated it was a synonym for prostitute. Although some teenage girls called sluts may be sexually active, it’s unlikely that there are large sums of money changing hands. And a saucy girl–really? Saucy can mean simply intelligent, but, less flatteringly it means “amusingly forward and flippant.” Are “forward” boys called any term that has been degrading since 1500? No. This term exemplifies not only the sexual double standard but also persisting intellectual sexism. Sexual promiscuity does not define the goodness of a person either; unless peoples’ feelings are being hurt or health being damaged, is this truly a judge of one’s character?

Finally, “lesbian” or “gay.” In the immortal, YouTube-sanctioned words of John Green:

So, I thought this was pretty widely known, but I guess I have to explain what gay means. Being gay means that you’re attracted to people of the same gender. So, a video can’t be gay because it doesn’t have a gender … Gay will never work as an insult because it’s not bad.

Why and how has our society managed to marginalize yet another minority and turn a simple word for identity into a volatile slur? Although evidence points to sexual orientation being genetic or biological, even if it isn’t, how is someone else’s life anyone else’s business? As Green pointed out, why is any object that is considered bad called gay? Because teenagers are horrifically misinformed about these issues. It’s basic human rights that are being violated each time the words gay or lesbian are misused.

Alexa Salvato is 15 years old. This post originally appeared at the fbomb.

Alexa Salvato is an undergraduate journalism student at Ithaca College. She is a section editor for Buzzsaw magazine and the community outreach chair of Feminists United. She anticipates a future as a writer and educator.