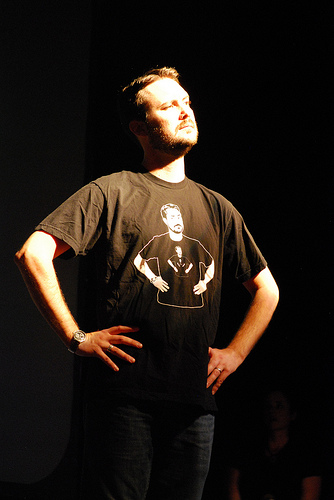 Like many a Star-(Trek)-struck 7-year old, I had the maddest crush on Wil Wheaton, the youngest actor on the Star Trek: The Next Generation set, playing Wesley Crusher. As I grew to own my geekiness–instead of just accepting it as something I inherited from my parents–I saw him again on Felicia Day’s famously geek-tastic webseries “The Guild,” and saw that the “Wunderkind” had grown into a Wunder-adult. For this edition of We Heart however, the deed of the day is this Tweet he made while I was stalking–er–following–him on Twitter:

I wish everyone going to the Charlie Sheen Pay Attention To Me Tour would skip it and donate the ticket price to a battered women’s shelter.

Hear hear! While donating to a battered women’s shelter is a good idea in general, it’s especially pertinent now: The media has been milking the cash cow that is Mr. Sheen’s mental collapse, and some (we’re looking at you, Piers Morgan) have even given him a big stamp of approval, while conveniently ignoring his history of abusing women.

Take a page from the Wunderkind’s book: donate to your local battered women’s shelter or give to the National Domestic Violence Hotline.