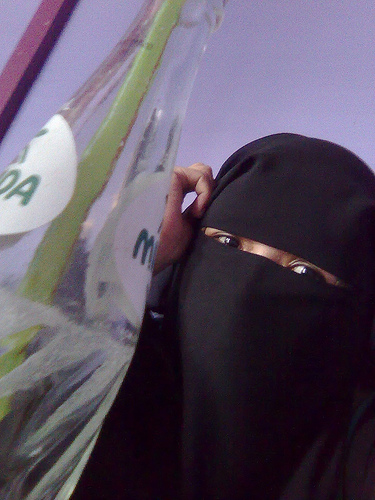 On Monday, France’s controversial veil ban went into effect. Backed by President Nicolas Sarkozy, the law does not explicitly mention Islam, but it prohibits the act of covering one’s face in public and would outlaw the full-face veil, or niqab. Offenders must pay a fine of 150 € ($217.47) or take French citizenship classes.

Supporters of the ban argue that outlawing the niqab is necessary to ‘preserve French culture’ and to battle insular Muslim communities. Politics are heavily at play: Sarkozy, whose approval rating is currently hovering at an abysmal 20 percent, has launched a fight against ‘radical Islam’ that seems to be desperate to be a bid to pander to France’s anti-immigrant far-right.

In truth, the law is more show than substance. “The law will be infinitely difficult to enforce, and will be infinitely rarely enforced,” said police-union leader Manuel Roux to France Inter Radio. Other major union leaders concur, reports The Guardian. The process to arrest a woman for wearing a veil is time-consuming: police have been told not to ask women to remove their veils in the street and instead are to escrot them to a station where they would then show their faces for identification. Thus far, at least two women have been arrested, and were charged with unauthorized protest and later released.

If banning the niqab is, in fact, about protecting the rights of oppressed women, it is not a very effective solution. If a woman’s relatives are forcing her to veil her face outside of the house, a ban will not magically make her go out in a miniskirt. Chances are that she will be kept at home. Thus, the policy would further isolate Muslim women–an odd tactic if the bill is truly meant to battle ‘insular’ immigrant communities.

What is most problematic about this conversation is that it correlates a certain type of garment with oppression. Therefore, it is more about ‘looking French’ rather than fighting oppression. I wouldn’t be surprised if the ‘French citizenship classes’ include a mandatory makeover.

As a Muslim and a feminist, I think it is important to have an open dialogue about the gender and Islam. The reality is that Islam is sometimes used to justify inequalities towards women, and calling this out is crucial. But the debate over the veil treats Muslim women as a monolithic group, raising the impossible question of whether or not Muslim women who wear the veil are, as a whole, either oppressed or liberated. There is no straightforward answer to this question, because Muslim women are a diverse group. Some Muslim women choose to cover, and others don’t. Some Muslim women wear the niqab voluntarily, but others may be forced to do so.

What this ban ultimately shows is a lack of understanding of France’s immigrant communities. The real source of debate should be in defining the responsibility of the state in oppressive situations inside the home. What kinds of services should the state provide? When it is appropriate for them to intervene? Ultimately, any solution requires that the French government build relationships of trust with immigrant communities–rather than enacting policies to further wall them off.