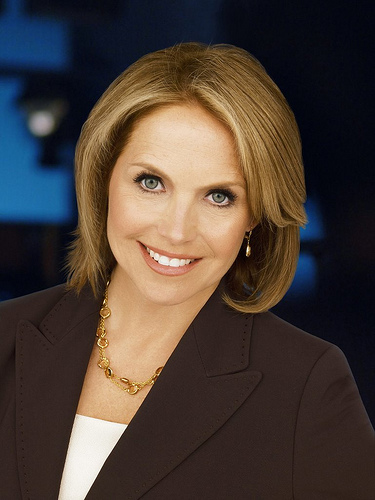 “They never let her learn the secret handshake there.” Katie Couric’s five-year run as anchor on CBS Evening News is reportedly coming to an end. The New York Times reveals behind-the-scenes details of Couric’s tenure at the network, from her chilly reception to her persistently low visibility, plus what’s coming up next for the Emmy-award winner.

This just in: Politico reports that Pelosi is OVER. She wasn’t involved in the last-minute budget kerfuffle because she was giving a speech at Tufts instead, and just like that, she went from “hot” to “not.” Irin Carmon does some counter-analysis at Jezebel: “Apparently, in Washington, sharing the spotlight and applying your resources where they’ll be most effective is also a sign of weakness.”

The supposedly anachronistic Congresswoman, apparently desperate to regain some sort of relevance in the House, also challenged Republicans who are hell-bent on defunding Planned Parenthood in a speech on the House floor Friday. She took a firm feminist stance against the cuts, saying:

The arguments with which the Republicans have put forth sound like the same questions of a decade ago. Do women think? It’s an assault on the judgment of women. It bespeaks a lack of respect for women to determine the size and the timing of their families.

“I am a little troubled over how White men’s investment in Black men’s misogyny in rap music isn’t interrogated.” From Racialicious: A Black Feminist Note on Nate Dogg

A fantastic and incisive piece on what the women’s movement can learn from the gay rights movement, at The Lady Finger.

Shark fu has been doing excellent coverage all week on another racist anti-choice billboard, this time in north St. Louis, Mo., and the fight to get it taken down. She’s also brought us one of the best quotes of the week:

…and the most dangerous place for my rights is in the hands of my oppressor.