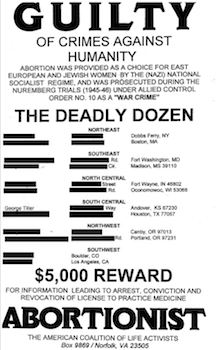 In Wichita this week, a judge refused to issue an injunction requiring abortion opponent Angel Dillard to stay 250 feet away from Dr. Mila Means, her clinic and her home. The civil injunction was requested by the Department of Justice under the Freedom of Access to Clinic Entrances (FACE) Act after Dillard sent a threatening letter to Dr. Means that included the following passages:

Thousands of people are already looking into your background, not just in Wichita, but from all over the U.S. They will know your habits and routines. They know where you shop, who your friends are, what you drive, where you live. You will be checking under your car everyday-because maybe today is the day someone places an explosive under it.

We will not let this abomination continue without doing everything we can to stop it.

Citing the First Amendment, U.S. District Judge J. Thomas Marten decided that this letter, though “intimidating,” did not constitute a “true threat.”

That decision was questioned by Kathy Spillar, Executive Vice President of the Feminist Majority Foundation and Executive Editor of Ms., in an appearance on the Rachel Maddow Show yesterday:

The way that you evaluate a true threat under FACE is very clear. Congress laid it out very succinctly. It is how the threat is perceived by the person who receives the threat. … I think anyone would reasonably understand what was meant by those words.

The second part is the context in which the letter was received or the threat was made, and clearly in Wichita the context is very certain. Dr. [George] Tiller was murdered less than two years ago, by an individual [Scott Roeder] who this person [Dillard] has been in touch with. The network of extremists has said that, “We are going to keep Wichita abortion-free,” and they clearly are willing to use a bullet to do that. Under the FACE law, this context is very important. The Dept. of Justice doesn’t even have to prove that this individual has the ability to carry out the threat. It is simply that the threat was made with the intent of intimidating Dr. Means. And Dr. Means was clearly intimidated by this threat.

Since the murder of Dr. George Tiller in 2009, there have been no abortion clinics in Wichita, and Means is hoping to change that. But she’s been up against a persistent campaign of intimidation since her plans became public. As soon as anti-abortion groups, including Operation Rescue, got word of her intentions, they began mobilizing to stop her, organizing disruptive protests at her home and office, and releasing WANTED-style posters that list her address. (For more details, see my article in the newest issue of Ms.)

There are frightening echoes in Dillard’s letter to the threats levied against Dr. Tiller in the years before he was murdered by Scott Roeder. Tiller, too, was stalked, threatened and the subject of ongoing protests.

More disturbingly, Dillard appears to be a fervent admirer of Roeder. She has exchanged letters and phone calls with him and, when interviewed in July 2009, had plans to visit him in jail. She told the Associated Press in that interview, “With one move, [Roeder] was able…to accomplish what we had not been able to do…So he followed his convictions and I admire that.”

The U.S. Justice Department took Dillard’s letter seriously enough to file for the civil injunction, but it’s unclear what will happen next. Two things are clear, however: Dr. Means needs protection–and so do the rights of the women of Wichita, who are legally allowed to have abortions.

The Feminist Majority Foundation, through its National Clinic Access Project (NCAP), is working to keep Dr. Means safe and able to provide full reproductive health services in Wichita. To learn more about the NCAP, visit the FMF website; or you can donate here to support its work.

Image a WANTED poster from Feminist.org.