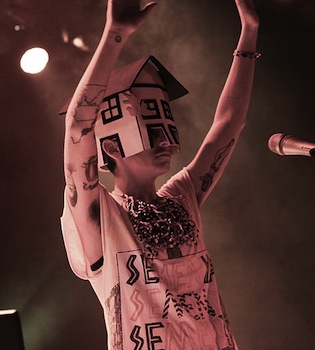 Fresh from the Coachella music festival, where she played songs from her debut album with the trio MEN, Talk About Body, JD Samson is back in New York, and it is her first conversation of the day. Formerly of the fabulous Le Tigre, now part of the electric and eminently danceable MEN (with Michael O’Neill and Ginger Brooks Takahashi), JD spoke with me about some of the most important things in life–queer theory, bodies, feminisms, pleasure and money–before heading out for a visit to the American Museum of Natural History “to see where we all came from.”

Ms. Blog: I love the song “Credit Card Babie$” on your album–it’s a great anthem for queer reproduction right now.

JD Samson: The song takes this kind of depressing topic and turns it around and makes it a way for queers to come together. … It’s definitely the song that people like to freak-out about the most when we play shows, which is really cool, and it is definitely the song that … made people interested in us, especially queer people. I wanted to write the song because I’m 32 and I’m definitely hitting a place where I’m interested in starting a family, but the complications push me back. The first verse is, like, “I just want to have a baby,” and the second one is “Wait a second, let me think about this, should I have a baby”? I think that’s a realistic conversation most of my friends are having right now.

You cover Joan Armatrading’s powerful song “My Family.” What is your vision for queer family or queer kinship, especially at a moment when the queer family in the mainstream just seems to mean gay marriage?

Joan Armatrading is my favorite musician who has ever lived and she’s very inspirational to me, not just for her songwriting but her vocal rhythm and persona. I’m actually wearing her T-shirt right now. My aunt is a lesbian, and my aunt’s ex-girlfriend introduced me to Joan Armatrading when I was a teenager, and it was one of those things where I was, like, “That’s for adults.” Then I started getting really into it and she became this amazing hero to me. “My Family” is from her first record, which she made with, questionably, her partner Pamela Nestor–because they’re not out. The song originally was very slow and I find it very emotional and almost religious. We really wanted to turn it around and make it a disco track. One thing about being in a band is that your family kind of shifts to becoming the people that you travel with–your band–and then it becomes the audience and your community, because we choose to spend every night of our lives with our fans and with each other. I really wanted to express my gratitude to the people around me who are so giving and kind and who I trust with my heart–my chosen family, really.

Talk about the album’s playful title, Talk About Body, and the meanings for you and MEN around trans and feminist politics.

After listening to the record in its entirety, we realized that we talk about a couple of things pretty regularly on it. One of them is the body, and also sex and gender expression and identity. Then we talk about money and we talk about power, and both money and power do come back to the body. It was important for us to have a title that wasn’t a command but felt like it could be. … My body and our bodies and MEN, the title of the band, also make people talk. What bodies we live in and how we get to choose our genders and label ourselves … it’s all just tied together.

You have talked about why the band was called MEN, and I am interested in what you outlined about the relationships between money, gender and a sense of entitlement. How do you still be generous as an artist and also value yourself?

It’s really difficult. I learned in Le Tigre that we are being activists through our work and we don’t necessarily have to do every benefit that people ask us to do, because it doesn’t help us to survive as activists in the world. This is an interesting kind of journey to go on, because in some ways you can feel guilty asking for money. I do have generosity issues where I’m continuously trying to pretend like I have more money than I do. I want to say yes to all benefits, and I want to give, give, give so much, but there is a line that I have to draw for myself. I was listening to some of the Le Tigre Feminist Sweepstakes record the other day, and there is this line that Johanna [Fateman] wrote that was something like “I am a feminist but I won’t be coming to your benefit.” It’s so brilliant. We just played Coachella, a huge festival, and we lost money. That is just how it goes sometimes. But people expect you’re going to be millionaires.

On that note, I know you DJ-ed a fundraiser in Chicago for the Transformative Justice Law Project. Why the commitment to queer justice organizations that aren’t working for the big-ticket LGBTQ issues such as marriage or the repeal of Don’t Ask Don’t Tell?

I am also a supporter of the Sylvia Rivera Project here in New York. I have an interesting perspective in terms of trans law because I am, in some circles, considered to be trans. But I really don’t identify as anything; I’m just me. That’s kind of difficult and problematic for some people to understand. But I am happy under the umbrella term of queer or lesbian or gay. I personally have a difficult time with the separation into miniature subcultures, and I really miss the larger family perspective, so I choose to live within all of them. But people really see me as this spokesperson for the trans community and I’m happy to take that on, and I’m also happy to not necessarily identify as trans but also be a spokesperson for that community because I think that opens everything up a little bit more, which is exactly what it should be all about: free gender fluidity.

I have to ask about the Christina Aguilera album Bionic: You contributed to the “My Girls” track.

Christina is a fan of Le Tigre. She was making a record of collaborations with other people that she respects and that she’s inspired by, which I think is so cool. We always have loved Christina. She’s an outright feminist in everything she does, and she speaks her mind and she is an incredible woman. She also is an incredibly hard worker and knows her craft better than anyone I’ve ever experienced. Johanna [Fateman, from Le Tigre] and I went to L.A. and worked with her for a week and spent, like, 10 hours a day in the studio, just the three of us and an engineer. People don’t expect that; they think there is going to be all these producers around and the truth is we were right in it all and we felt very comfortable. Now we’ve been writing music for other people a little bit and trying to change our world.

What are you reading right now?

The Patti Smith book Just Kids, which I’m really into ,and I’m really excited after that to read Bossypants by Tina Fey. And I read Eileen Myles’s Inferno. I actually just bought a new copy of Leslie Feinberg’s Stone Butch Blues and I was going to re-read it because I feel like it’s been too long. I’m really inspired by people who have opened the world up, and that’s the reason why I read so much nonfiction. I’m just, like, tell me about how you do this, you know?

Photo of JD Samson performing with MEN from Wikimedia Commons.