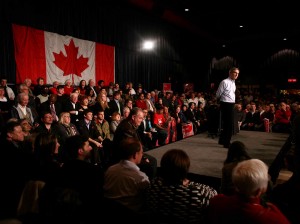 North of the 49th parallel, four more years of Stephen Harper’s Conservative rule has begun. On May 2nd, Canadians went to the polls and gave Harper the majority of seats in the House of Commons–the majority he has eagerly and unsuccessfully sought in two previous elections–and thus gave the Conservatives unshakable federal decision-making power. The result also did exactly what many predicted: polarized Canadian politics by decimating the centrist Liberal Party and almost eliminating Quebec’s separatist party, the Bloc Quebecois.

Instead, the left-wing New Democrats (NDP) became the official opposition for the first time in the nation’s history, bringing with them a record number of women members of parliament. What will this mean for Canada? Despite the exciting result of having a strong, progressive party take center stage in parliament (official opposition status gives the previously marginalized NDP access to huge research budgets and staff support they’ve never had before), the prospect of a Bush-like governing party that won’t go away for at least four years is frightening to those of us committed to women’s rights.

I am not naturally an alarmist, but there is little doubt in my mind that the world is going to see Canada take on a decidedly Republican-like politic. In the coming years, here are just a few things we are likely to see in this once “welfare state”:

Harper will also be in a position to appoint four out of nine Supreme Court Judges during his term. He has always shown a distaste for the judicial system and a lack of respect for the role of the judiciary in Canada’s constitutional democracy. Minorities and women in Canada have often relied on the courts to adjudicate equality rights, but Harper might shut down the progressive possibilities of a non-partisan court.

It’s going to be a rough ride. There will be some celebration of the marriage between Quebec’s progressive voters (who, in the past, have tended to vote largely for the Bloc Quebecois) with those in Anglo-Canada–the historic phenomena that gave the NDP such success in this election. But the future looks grim for women’s rights in Canada.

Photo of Liberal leader Michael Ignatieff at a Town Hall in Winnipeg, Manitoba from Wikimedia Commons.