Are Vibrators Coming Out of the Closet? - Ms. Magazine
Skip to content 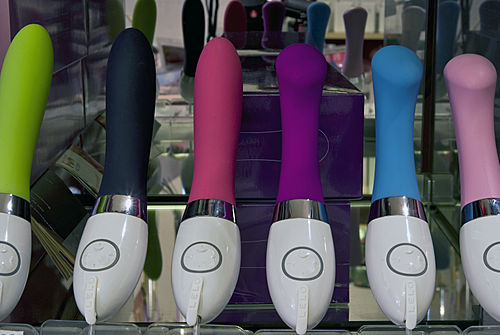 Not so long ago, vibrators were illegal in several states, including Texas, Mississippi and Alabama, or found only in seedy sex shops. But as The New York Times reports, today they may be purchased at your neighborhood drug store. Even Oprah has pitched the helpful tool. And who can forget the Rabbit Pearl popping up in Sex and the City?

And yet, they aren’t quite out of the closet.

I can sit with my 10-year-old daughter during prime-time TV and watch a commercial for Viagra, but I can’t advertise our OhMiBod fan page within Facebook.

Nylon magazine won’t run the couple’s ads and the Small Business Administration refused their loan application because vibrators are a “prurient” business.

Slang for penis and vagina also says a lot, especially “cock” and “down there.” Cock: Cocky, boastful, swaggering. “Down there?” Unspeakable. Shameful.

This all reminds me of Zestra’s difficulty getting ad space for a product that arouses women. TV networks, national cable stations, radio stations and Facebook all resisted. Yet Viagra ads run on all of these platforms with no problem.

With such mixed messages, is it any wonder that surveys find mixed experiences among women when it comes to sexual pleasure?

Indiana University’s comprehensive survey found that while 91 percent of men had an orgasm the last time they had sex, only 64 percent of women did. These numbers roughly reflect the percentage of men and women who say they enjoyed sex “extremely” or “quite a bit”: 66 percent of women and 83 percent of men. Only 58 percent of women in their ’20s experienced “the big O” during their latest sexual encounter.

As I’ve recently posted, 30-40 percent of women report difficulty climaxing. When women “lose their virginity,” they are also likely to lose self esteem. And one-third of women under 35 often feel sad, anxious, restless or irritable after sex, while 10 percent frequently feel sad after intercourse.

On the other hand, many women do enjoy sex a lot, and frequently orgasm.

Could it be that each woman’s enjoyment is affected by which message has been most strongly drilled into her mind?

Keeping women’s sexual pleasure kept in shadow and suspicion has an effect. Time to come out of the closet! And perhaps we can start by  removing the shame around vibrators completely.