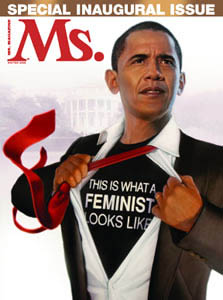 In the struggle to ensure safety for the women in our lives, it’s time for men who acknowledge how much we have learned—and gained—from the women’s movement to step forward and speak out. In the midst of two or three wars (it’s hard to keep count), a federal budget proposal designed to reward the rich and punish the poor and the rumblings of a presidential campaign that already has a toxic odor to it, men who profess to be women’s allies can’t allow our voices to be drowned out. We have to stand by women when adversaries of their rights try to reverse decades of gains. For the sake of our daughters—and sons—we can’t allow that to happen.

Like other men engaged in profeminist, antiviolence men’s work, I have spoken out in support of women’s reproductive rights but have little concrete action to show for it. While I spent the better part of a week in South Dakota in the days before the 2006 election, when a no-exceptions ban on abortion was on the ballot, I have not sustained the connection. All the “reasons” I might cite for why end up feeling like excuses. I know that I—and other men who care about these issues—can do better. Perhaps a new campaign that a coalition of men recently initiated, and that Voice Male , the magazine I edit, played a role in promoting, can help to point the way.

“A Call to Action: Men Speak Out About Sexist Media Coverage of Rape,” was inspired by the media aftermath of a horrific gang rape of an 11-year-old girl in Texas. The New York Times published a victim-blaming front-page story about the young girl’s assault by 19 men and boys, and in response many men and men’s organizations came together to speak with one voice. Their call to action demands that, rather than focusing on a woman victim’s manner of dress–as the Times did in the Texas case–the media should train its high beams where they most appropriately belong: on the perpetrators.

Efforts to circulate the statement nationally began in April, which was Sexual Assault Awareness Month. One way readers can help strengthen and sustain the campaign is to visit its Facebook page. There you can read about the campaign and register comments. We hope you’ll begin with “like.”

The Texas story that sparked the outrage furnishes a powerful metaphor about silence and complicity. As the statement asks, since gang rapes can be stopped if only a single man intervenes, how can we accept a world where not one guy—or more—stepped in to stop this attack? Are men so intimidated by one another that we can’t find our voices? Can’t find our hearts? Can’t think about our mothers or daughters, our sisters, our wives?

Women have always done the heavy lifting in the movement to prevent rape and sexual assault—as well as in the movement to protect women’s reproductive rights. Of course, each is part of the same movement—a movement for gender justice, a movement men have a stake in, that more men are joining. But still not enough. Our sons and daughters are counting on us. So are our brothers and sisters.

This piece was adapted from Okun’s “From the Editor” column in the Spring issue of Voice Male.