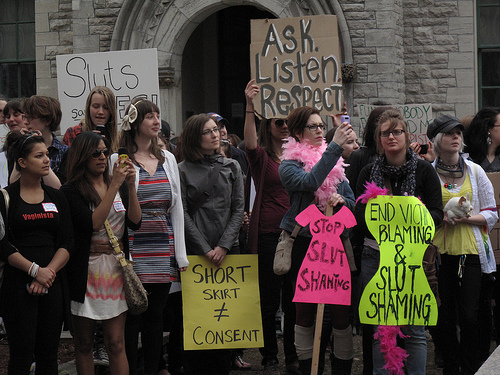 When I initially received my invitation to SlutWalk Los Angeles, I didn’t open it. I was aware of the Internet hoopla around SlutWalk, the anti-rape marches sweeping North America, Australia and Europe. I’d seen enthusiastic online posts from students, friends and much-respected peers. But I couldn’t get past the sensationalist (and attention grabbing!) word slut.

My reaction would have been different 15 years ago. As an eager, young, white, working-class woman new to feminism, I was absolutely gung-ho and full of riot grrl sass. I embraced in-your-face tactics and enthusiastically sought to reclaim slut, along with words like bitch and cunt. But as a white, working-class feminist in 2011, swiftly approaching 39, I often harshly judge my younger feminist self. She seems to me less strategic, less analytically adept–more prone to being swept up by the collective energy of a cause.

And the word slut now brings up feelings I’ve developed over time about the hypersexualization of our culture. Porn’s ever-increasing influence on our sexuality has left me cynical. The rise of raunch culture, in which too many women interpret stripper-pole classes as a vehicle to empowerment, has disappointed me. The sexualization of our children has made me angry. Collectively, this makes claiming the word slut, an effort I found revolutionary and exciting over a decade ago, now feel cliche, confusing and counterproductive.

I was not alone in my reaction. SlutWalk has drawn vocal feminist criticism, most prominently from Gail Dines and Wendy J. Murphy, who wrote in the Guardian:

The term slut is so deeply rooted in the patriarchal “madonna/whore” view of women’s sexuality that it is beyond redemption. The word is so saturated with the ideology that female sexual energy deserves punishment that trying to change its meaning is a waste of precious feminist resources.

After reading this piece, I went out and talked with many of the activists behind SlutWalk. All underscored a single point: While re-appropriating slut is one of the intentions behind SlutWalk, it is not what SlutWalk is primarily about. SlutWalk is a response to a thoughtless Canadian police officer’s ignorant and sexist comment urging women to “avoid dressing like sluts in order not to be victimized” this past January. Toronto feminists Sonya JF Barnett and Heather Jarvis were galvanized to organize a protest–the first SlutWalk–to call for an end to victim blaming. They created SlutWalk to ignite a conversation about sexual assault, highlight oppressive slut-shaming, challenge the tendency of the criminal justice system and the culture at large to blame the victim and, yes, re-appropriate slut.

Some of us embrace the word slut. Some don’t. But we’re all marching for two vital liberties: both the freedom to be sexual and the freedom from violence, harassment and rape

Scheduled SlutWalk LA speaker Shira Tarrant, who did a three-part interview series with Gail Dines for the Ms. Blog, had this response to the Guardian article:

My message to feminists like Gail Dines who are busy attacking SlutWalks is that you miss the point. If the word “slut” bugs you then focus on the WALK part of SlutWalk and stop attacking political allies who are working to prevent sexual assault. SlutWalk is a movement that is getting international media attention and bringing thousands of people into the streets to speak out against rape and sexual assault. This is an amazing moment of anti-violence activism. This is huge. We need it!

As for “precious feminist resources,” everything I’ve seen with the SlutWalk leads me to conclude we’re generating them, not using them up. The radical, loving outrage at the Boston SlutWalk was electric, and it’s already being put to use to power a new coalition in Boston called RAGE: Radical Alliance for Gender Equality. It’s motivating a whole new generation to take leadership in feminist action. It could not be more energizing.

The mobilizing success of SlutWalk is hard to deny. SlutWalk’s founders initially hoped for a turnout of 100. Instead, it resonated with thousands and exploded into over 70 satellite marches globally. According to SlutWalk co-founder Jarvis, it has spread faster and wider than the founders can keep pace with.

Media critics I spoke with had more mixed opinions about whether the term slut works as a media strategy. Anita Sarkeesian of Feminist Frequency isn’t personally bothered by the word slut, but thinks it has worked against SlutWalk’s aim of putting a halt to victim-blaming.

The sensational word slut has gotten the organizers lots of media attention. However, that attention is not typically about violence against women at all, but about how women should or shouldn’t dress, which is a completely regressive conversation that does not help anti-violence activism.

Jennifer L. Pozner, founder and executive director of Women in Media and News, thinks the corporate media coverage of SlutWalk has been unusually feminist-influenced. Pozner, who has monitored media coverage of violence against women since 1992, says SlutWalk is bringing an anti-victim-blaming message outside the feminist, anti-racist community in a rare way.

I was pleasantly surprised at how great the media coverage in Toronto and Boston was. It contextualized rape as violence, as institutional, and gave voice to feminist antiviolence experts in ways I almost never see in news media. I see [SlutWalk] as an effective media tool–well-messaged media stunts are a key element in creating a climate conducive to social change. Anything that drives home to a mainstream media audience the concept that rape is not a crime dependent upon fashion, and that women do not ‘provoke’ sexual assault with their clothing or drinking, is a positive, potentially transformative force.

That doesn’t mean SlutWalk’s brand and style of activism will appeal to everyone or be accessible to everyone. Ernesto Aguilar writes at People of Color Organize!:

How would the Mexican-American mothers I know feel about their daughters calling themselves whores? Or the Black mothers of friends react to their daughters calling themselves sluts? Probably not well. Many communities of color have had growing movements against anti-woman language for good reason. For communities of color, even those who aren’t expressly political, there’s a visceral reaction to name-calling aimed at women of color, who are seemingly always the targets of names whose historical, cultural, social and political edge white women will never confront.

I know when I was a teen mom I could not have risked the scrutiny of participating in a SlutWalk. As a professor with a grown child, I can.

But she goes on to say:

And therein lies the heart of the matter. Are we bad or subpar feminists if we participate? Just as my own feminist consciousness and feminist activism grew and changed, so do movements and all activists behind them. And in my arduous exploration of SlutWalk, my opinions grew and changed. I was particularly inspired by my conversations with founder Heather Jarvis, who spoke as an individual committed to fighting injustice, candidly acknowledging the strengths and weaknesses of her efforts and SlutWalk at large.

I was also inspired by the response of lifelong feminist activist Zoe Nicholson (one of six women who fasted for 37 days in 1982 to support the  Equal Rights Amendment). While publicly acknowledging that she was not a fan of SlutWalk’s name and the misunderstandings that it generates, in the end she spoke out in support of the walk  and in solidarity with all victims of violence. As she states,

Every time some one agitates, demonstrates for equality, the opponents lose their stranglehold just a little bit. No act is too small.

In the end, I support and stand in solidarity with SlutWalk. 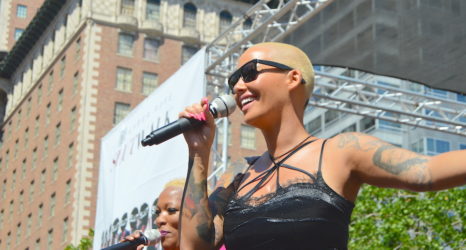 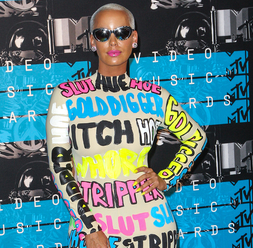