If a Woman Isn't Bruised and Bleeding, Will Her Rape Be Counted? - Ms. Magazine
Skip to content 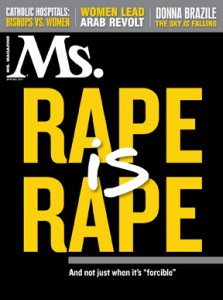 In late January, U.S. Rep. Chris Smith (R-N.J.) sparked outrage when he introduced the No Taxpayer Funding for Abortion Act (H.R. 3), which sought to further restrict abortion funding for all women. But what also angered feminists was that, in drafting an exception to allow abortion funding for survivors of rape, the bill defined “real” rape exclusively as “forcible” rape. For sexual assaults that didn’t fit that narrow definition, funding for an abortion would be denied.

After a week of intense pressure, Rep. Smith dropped the term “forcible” from the controversial bill. Problem solved? Hardly.

In fact, the concept of “forcible rape” has long been used and is still being used to limit the reporting of rape at the federal level. Since 1929, the FBI’s Uniform Crime Report (UCR), which tallies all crimes reported to local law enforcement each year, has used this archaic definition of rape: “The carnal knowledge of a female forcibly and against her will.”

That counts some rapes, certainly. But what gets left out?

Plenty. The UCR’s definition excludes victims of nonconsensual sodomy and oral sex, and those raped with fingers, fists or objects. And all male victims, of course. Also, because the definition includes the word “forcibly,” police departments often interpret the rule (against UCR guidelines) as leaving out rapes of women with physical or mental disabilities and those who were unconscious or under the influence of drugs and alcohol (despite the fact that at least 22 percent of all rapes involve those substances or incapacitated victims—and some studies put the number as high as 77 percent). The assumption, strangely, is that those women weren’t “forced.”

The UCR definition, both in its wording and its effect on police practices, thus omits a large number of rapes—which then impacts the investigation and prosecution of rapists. Some studies have shown that 90 to 95 percent of rapes are committed by serial rapists. If those serial predators are not prosecuted, they’re free to rape again and again.

And that’s why a change in the definition of rape would lead to better law enforcement response and could thus reduce dramatically the incidence of rape. A modern definition would include sex of all kinds without consent. It would embrace victims regardless of sex, gender, age, disability, consciousness or level of intoxication. And it would encompass incest; rape with an object, finger or fist; and sodomy or oral copulation without consent.

Joanne Archambault, a sexual-assault-investigation expert and founder of the nonprofit End Violence Against Women International, insists that the UCR’s definition of rape sends a frightening message to society about what types of sexual assaults matter.

“The fact that it only tracks forced penile-vaginal rape says a lot,” she points out. “Are we saying all those other ones aren’t important? Of course they are.”

She adds that the UCR definition feeds into social stereotypes about who is a “real” rape victim, which have a huge impact on rape reporting. “When they’re first assaulted,” she says, “[rape survivors] aren’t thinking of law enforcement; they’re thinking of safety. They go to their friends, loved ones, family first.” If a rape survivor isn’t validated by her community, she’s less likely to report the crime.

It’s high time for a change. For rape survivors, a modern definition of rape at the federal level would acknowledge, once and for all, that rape is rape—and that the stories and experiences of all rape survivors count.

This is an excerpt from the cover story in the Spring issue of Ms. magazine. For the entire story, look for Ms. on your newsstands or join the Ms. community and have a copy of the magazine delivered to your door.

Want to help fight rape in your own community? Join the No More Excuses! campaign of the Feminist Majority Foundation and Ms. magazine and demand that the FBI change its outmoded definition of rape, that city police departments test every rape kit in their backlog and that cities make sure untested kits don’t accumulate again. Go to our online campaign headquarters where you’ll be directed to letters you can send to FBI director Robert Mueller and U.S. Attorney General Eric Holder. You can also order a local take-action package that includes a dramatic video about the rape-kit backlog by Lorraine Sheinberg and Susan Rubin and ideas for making a difference on this vital issue.